In late September, Lego released its second wave of figures for their first attempt at a toy-game extension, Lego Dimensions. Being fans of both the land of Oo and sticking tiny blocks together until you realize they’re backwards and you have to yank them apart, which then requires summoning a demon to break the unholy hold, my husband and I got it about a week after dropping.

There are two packs for Adventure Time. One contains Finn, the Jake-mobile (which is a car), and the psychic tandem war elephant (a second vehicle). The other one has Jake as a character as well as LSP, and BMO is a vehicle. (Why is BMO a vehicle when they’re the size of a Game Boy? Ask Lego).

As the Finn the human pack comes with the level and unlocks the world, that’s the one we got. After waiting a day and a half for the update to the game, (seriously, it’s a good 10 GB, so clear your day) we were finally ready to go. The first step was the level.

It’s a combination of bits from three different episodes. The first is when Finn gets the Enchridion, his magic book of heroic stuff and other things heroes should learn. That part pretty much follows the episode beat by beat. After that, there’s a bit with Bubblegum revealing to Finn and Jake about the Lich (you’ll spot the evil snail everywhere throughout the level, so look around for him) and ends with you fighting Ron Perlman in the ruins of a subway from Fallout 3.

The level is meh. Almost all the levels in this game are, frankly, kinda boring. They add a few winks and nods here and there, but it was mostly following along with an episode that any fan of Adventure Time already knows. What makes it even more confusing is they got all the voice talent back for the world itself but added barely anything new to the level. All the dialogue to the level was ripped straight from the episodes. The only good Lego Dimensions level has been Portal, which felt like Portal 2.5 and perhaps our only hope for a sequel. As it told a new story, it really stood out from the rest that relied upon rehashing stories we already knew. All the rest feel like something the game developers threw together the night before it was due after spending the weekend getting wasted.

However, and it’s a good however, the Adventure Time world is mathmatical!

(Note, I was playing as the Wicked Witch because she’s awesome and can fly and loves blowing things up in green fire. There was also a point when the Ice King kept hitting on her asking if she was a princess)

There’s the Fire Kingdom complete with fire wolves running around as well as Flame Princess and Cinnamon Bun hanging out waving. (And yes, there’s also a secret area built from Magic Man that creates the Snow Golem and Fire Wolf Pup. Glob, thinking about that episode is making me tear up.) 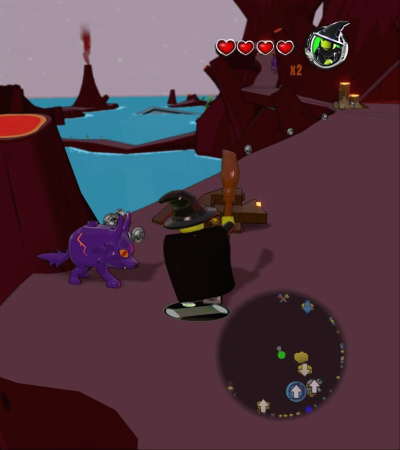 You can visit the Lemongrab kingdom, which is as UNACCEPTABLE! as you’d expect. 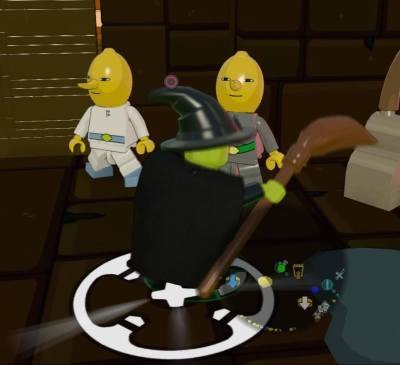 There are so many inside jokes hidden through the Candy Kingdom, Finn and Jake’s treehouse, the lair of bones, and more. Like the voting booths for when accomplished Princess Bubblegum was stuck in her own election against an idiotic manchild who knew nothing about running a kingdom.

And, of course, we have the Ice Kingdom, complete with a delusional Ice King who needs your help tracking down lost Gunters, one of whom has access to the amulet. (I didn’t spot Gunter’s baby, but it’s possible I missed that freaky mystic cat). 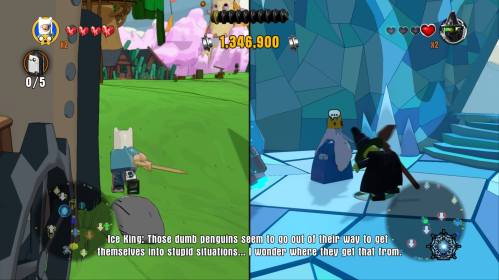 Each Lego Dimensions level has stuff you buy off someone to burn off studs that will add more to the world, like say Tree Trunks’s house. In this world, it’s supervised by that lovable jerk Magic Man. I don’t know if it speaks to the fact that Adventure Time has such memorable characters or that they got all the voice talent in for this, but it’s so much fun having Magic Man talk trash to me while I give him all my money. Seeing all the characters again, even if it’s just to have Choose Goose send me on a damn treasure hunt, fills me with warm fuzzies. My only complaint is I wish I’d stumbled across Susan and the underground lair of what had once been the last humans.

If you have the Doctor Who pack, prepare for a kick to the gut when you travel back in time to find Simon and baby Marceline needing help to make some chicken soup.

All-in-all, the game level is sitting on top of a train while your partner keeps clearing it out for a few days, but the world is something any Adventure Time fan will love. The Lego packs are pretty hit and miss. When the team loved whatever franchise they got to play with, it really showed: Portal, Doctor Who, Adventure Time. But when they didn’t care about something (Back to the Future), it was very obvious in its eternal blandness.

Now, if someone could explain to me why there’s going to be a Mission Impossible pack and what kid younger than 40 knows about the A-Team, I’ll be grateful.

I thought I’d go out on this picture of the Tardis that fell over, because I assume the Doctor got trashed on Dalek brandy.