The Best Games for Advanced Players from Gen Con 2016

In my last post, I listed my favorite games for solo and two players from Gen Con, the original, longest running, and best attended gaming convention in the world, which took place in Indianapolis August 4-7. In this post, I continue sharing the best games I discovered, focusing on games for more advanced players. These are heavier games that may be too long and/or complicated for the more casual gamer, but those interested in hardcore gaming will definitely enjoy them. Below are brief descriptions and links to more information from BoardGameGeek. The games are in no particular order.

The Best Games for Advanced Players from Gen Con 2016

via Greater Than Games (Fabled Nexus)

When I saw that Richard Launius (Arkham Horror/Elder Sign), Darrell Louder (Compounded), and Chris Kirkman (Dice Hate Me Games) had gotten together to make a game, I was already going to buy it, no matter what it was. As I’ve stated before, I’m a huge fan of Dice Hate Me Games and Greater Than Games, so I. AM. PUMPED. about this Cthulhu-themed game where players act as cults trying to summon their god first, despite pesky investigators working against them to seal off the gate to the beyond. During the game, players use spell cards to move cult members around or to ready a spell for later use. There’s an engine building element, as when you ready spells, the symbols on those help you to ready more spells. Each location where you move cult members on the board gives you special abilities, and taking control of that area of the board gets you more abilities, but beware: lots of activity attracts the investigators! Tempt fate one too many times and earn too many elder signs, and your cult will be shut down. A cult wins by raising their “summon track” to nine before the investigators can close the gate. But really, no one ever wins with Cthulhu. This game has just finished Kickstarting, so expect it in stores some time next year.

Stonemaier Games produces my absolute favorite game, Viticulture, so I was super excited about this one! Scythe is a 4x game, meaning that it’s a strategy based game where players eXplore, eXpand, eXploit, and eXterminate. It’s set in an alternate history 1920s time period where a capitalistic city-state, “The Factory,” which fueled the war with giant armored mechs, has shut down and gained the attention of nearby factions. Each player acts as a member of one of those factions who are attempting to claim their stake and earn their fortune. Instead of rounds or phases, Scythe uses an action selection mechanism, which I really liked because it heavily decreases downtime between turns (in heavy games, the downtime can be brutal). There’s also a lot of choices and decision making in this game. Each player gets their own action board, and you make choices on fighting, building up resources, building up power, etc. You don’t have to do any one thing; in fact, it’s probably best to diversify. What I liked best about this game is that the basics are fairly simple – you can do one of four things on your turn, and you’re trying to earn points – so it’s very easy to learn. However, there is so much choice in this game that you have to be careful, because if you take too long to build your engine, the other players will have already ended the game before yours has even started. This game is definitely worth checking out, and it already has its first expansion coming soon!

This was one of the more popular games at Gen Con. It sold out, and it was very difficult to get into a demo. Luckily, my friends were able to squeeze in! Last Friday is inspired by the horror “slasher” movie genre, so if you’re into those types of films, this game is definitely for you. It is a deduction game of hidden movement and hunting. Most players take on the role of young campers challenged to survive a terror-filled weekend, while one player acts as the psychopath, hunting them and hiding in the shadows. Of course, the psycho wants to stay hidden and kill all the campers, while the campers want to find the murderer and kill her before they are all killed. The game is played over the course of four “chapters,” each playing out differently as the hunter becomes the hunted, and then comes back from the dead seeking revenge. This game nails the theming, so make sure you don’t play right before bed.

My husband and I are big theme park fans (especially of Disney), so we’re willing to try pretty much any type of theme park game. We were wandering the aisles of the exhibition hall at Gen Con when we came across this one, and we were happy we did! This game is called Unfair for a reason – opponents can mess with your park by sending hooligans to vandalize it, inspectors to shut down your attractions, and more. Everyone begins with a hand of cards and a front gate to your park, and it’s up to you to build from there. You can build rides and attractions, hire staff members, and fulfill “blueprint” cards, which are secret goals to earn you extra points. Each round also includes an events phase, where players throw out events cards in order to help themselves or hurt opponents. There’s also a “City” deck, which helps you for the first half of the game, but beware, as the tides turn once you pass the fourth round. The game is played over eight rounds, and the player with the most points at the end wins. You can bribe, blackmail, and undermine, but the one thing you can’t do is be nice, unless you want to lose. This game was a tremendous amount of fun and employs more strategy than you first give it credit for. Oh, and I forgot to mention that the parks aren’t just regular parks. You’re building from themes like Robots, Vampires, Jungle, and Pirates. Definitely worth Kickstarting if you like set collection and theme park-themed games.

This was another game that ended up being very popular at the con and sold out completely, so I wasn’t able to score a copy. In this game, you play as the captain of a ship and crew, and you take your ship out sailing to collect resources, find new crew members, and commission buildings for your capital city. The combination of buildings you have is very important, as each building has a unique ability, and the combination of abilities can greatly enhance your strength as a player. You can also use events to gain influence, and you can even hire pirates and sea monsters to help you conquer. At the end of the game, the player with the best capital city and the most wealth wins. What I found interesting about this game is that you have a choice when building: you can either pay to build, OR you can collect the appropriate resources and use them to build. The theme of this game is really on point (if you haven’t figured it out yet, I’m a sucker for good theming), and I think it’s going to do well in a year where tons of pirate/high seas games are being released. Plus, Ryan Laukat, owner of Red Raven Games, designs and does the artwork for all of his games solo, all while running his company. Hats off to you, Ryan.

I’ll admit that I did not have a chance to play this game because it immediately sold out. This was THE game this year at Gen Con. You know, the one that everyone lines up at 7AM and then runs for. Seafall is also a 4x game (as explained in the Scythe description above) set in a world that’s trying to come out of the dark ages and has rediscovered seafaring technology. This game was so popular because it’s campaign driven, much like Pandemic Legacy, which was also wildly popular. Seafall evolves as you play it, building a different narrative for each group who embarks on the adventure. In the game, players take on the role of an empire that consults with advisers to explore islands, develop trade, discover new islands, experience ship-to-ship combat, send out raiding parties, and more. This is a very well made game with lovely components, which is likely why it’s a little more expensive. If you have a group that played Pandemic Legacy or Risk Legacy, you’ll definitely want to pick this one up. Again, this is a great seafaring game that’s sure to do extremely well in “the year of seafaring games,” as I’ve dubbed this upcoming year. 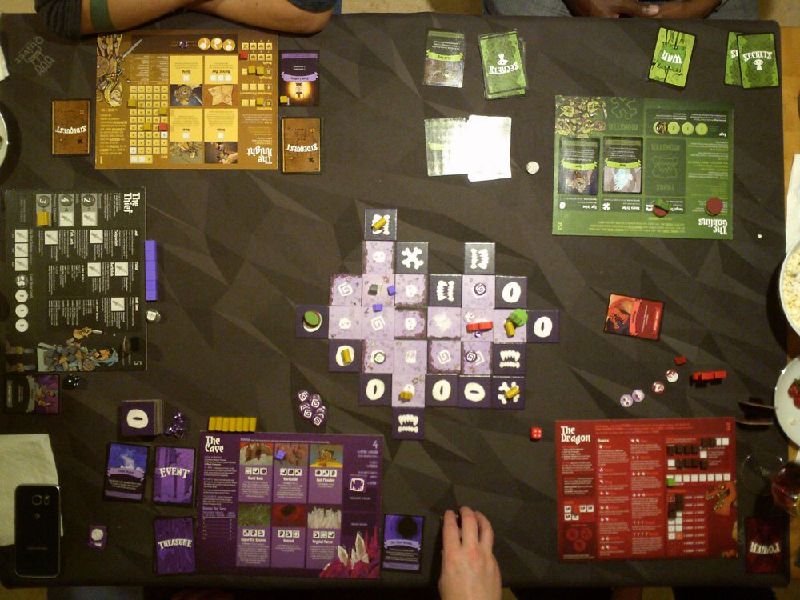 The last game I’m going to mention is Vast, which was a sleeper at Gen Con. This was one of those games that no one knew too much about, but once people started playing it, they were immediately hooked. Plus, the designers were really cool and hung out in the gaming rooms, chatting people up. My group of friends really loved this game. The theme? There’s a dragon in a cave hoarding treasure, but due to malevolent crystals filling up the cave’s rooms, the entrance is hidden. You and your friends undertake a cave-crawling adventure to reach individual goals, depending on the character with which you’re playing. You can choose to play as the daring Knight, the greedy Dragon, the chaotic Goblin horde, or even the Cave itself! What makes this game so cool and unique is that each role has its own pieces, its own board, its own powers, and its own way to win. The game is totally asymmetrical, which provides endless replayability as you and your friends explore the roles in various combinations. The experience can be different every time, which makes for many exciting adventures! The game debuted at Gen Con and is just now shipping to Kickstarter backers, so look for it in stores hopefully soon.