I reviewed Layers of Fear a little while ago and wasn’t a huge fan. However, when I saw the release of the DLC, I was curious because the main character has been switched from the painter to his daughter. I played on PS4. Here’s the trailer: 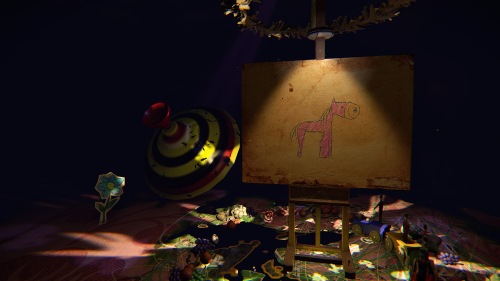 “Layers of Fear: Inheritance expands the plot from Layers of Fear and tells the story of the painter’s daughter, who comes back to her childhood home to face her past. Lead the daughter through what’s left of the mansion and take part in the madness that her father bestowed upon the whole family. Can she forgive her father, or will she resent all that has happened?”

It’s never really explained how long after the main game Inheritance takes place, or why the daughter wants to come back. I did like the use of flashbacks as you explore the familiar house, because you get a different perspective about living there. Some of the flashbacks can be upsetting, because they’re from the perspective of a child whose parents are constantly fighting. I wasn’t really satisfied with the ending I got, but one of the others might be more conclusive.

The graphics haven’t changed from the main game – it still looks really good. The lighting effects from the flashlight are nicely done. There is a discombobulating fishbowl effect utilized during the flashbacks – I have no idea why the viewpoint couldn’t just be made shorter. Instead, you’re short AND looking through a fishbowl, which is very strange and slightly nauseating. It confuses your sense of direction a bit too – at least it did for me. And you’re super slow during the flashbacks, which is annoying! There’s a couple instances where photosensitive people might be affected.

The VO acting continues to be all over the place – the painter is pretty bad (he’s overacting), but the mother and daughter do a good job. The soundtrack is excellent and creepy, and the sound design is really great too – they bring back the whispering from the controller when something interesting is nearby, which I liked in Layers of Fear. The subtitles are almost impossibly tiny if you’re sitting on the couch and playing (and I just got new glasses!).

You’re able to choose to play Inheritance from the main menu. I’m not sure if you can play without having played the main game, because my save file was still present. The DLC only took me about an hour and a half to finish, and some of that was wandering around. That was the most frustrating part of Inheritance, for me – I don’t remember ever getting lost in Layers of Fear, but sometimes the way to move forward was obscure, especially because the game is so dark. If you turn the gamma up, it washes everything out, which makes it equally difficult to see. I was happy that Inheritance doesn’t rely as much on jump scares as Layers of Fear does, and there are some genuinely creepy and creative setpieces. The best one is set entirely in a world of crayon drawings and make-believe. There are multiple endings to find, just like in the main game, which will extend that playtime if you enjoy the game.

Very short DLC that’s probably worth your time and $5 only if you really enjoyed Layers of Fear. However, I think I would have liked the main game better if it was more like this.