What To Do When Your Childhood is Destroyed

Today is the end, the fabled apocalypse predicted in Tobin’s Spirit Guide — July 15th the Two Thousand and Sixteenth year of our Lord, marked in the annals of history forever as Destructor Friday. AKA the release of Ghostbusters with the ladies in it!

Cries and lamentations echo down the stricken, abandoned streets of America. Fully grown children wail in their cribs as they face what this will mean for their future and their past being rewritten before their very eyes. Well, don’t worry. I’m here to help guide you through this trying time before everything we’ve ever known is destroyed by the Pulverizing Childhood police.

First, you have to gather together the sacrifice to the slavering dark ones or they shall drain your essence to power their giant harpy robots. By decree of all reboots, into a ritual fire must be tossed your copies of the original Ghostbusters movies. For once a new one shall appear, all memory of the original is forever wiped from human conscious and never spoken of again. ‘Tis Ape Law! (The one with Tim Burton’s Ape Lincoln. No one knows who Charlton Heston is anymore).

Mourn while you stand over the fire, the flames a disturbing green from boxes of Ecto Cooler popping like zits in the heat. Not just for yourself (though there will be plenty of that, I’m certain), but for every other person upon this planet who can no longer delight in the phrase “He slimed me.” Can no longer wonder how you respond when someone asks if you are a god. Will not understand why the hell there needed to be a ghost blow job scene. Gone. Every second of it that has been shall never again be. That is the power of reboots. 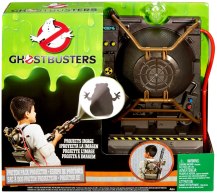 For within the flames burns not just the movies of your past, the toys plastered with only boys on the packaging (even in 2016), and your solitary man tear, but also your childhood charred to ash. No one on the entire planet can understand the true suffering you must endure of someone daring to remake a beloved movie from your childhood you probably shouldn’t have seen anyway (dear Lord, were there a lot of sex jokes in Ghostbusters that went right over our heads). And not just any remake, but to switch the genders of every main character? It is a true sign of the apocalypse itself to dare imagine women as anything other than secretaries, love interests, or pretty extras without any lines.

Because of the release of this movie, your past and everything in it ceases to be. No more long summer days of you peddling your bike to the dirt lot to try and build your own treehouse, no more hazy nights chasing after bugs — all of it gone like chaff on the wind. As you rise from the fire, every ounce of misery and angst burned from your body with it, there is only one avenue remaining for someone as twisted and gnarled as a man with no childhood. With all of your loved ones obliterated from your life because of the existence of a rebooted movie, and any reason to cling to the things you once cared for, joy itself drawn from your soul like weep from a wound, what more can remain for a man but to become…

It’s true. He had no childhood because his parents were gunned down in front of him.

You no longer have one because the Ghostbusters reboot deleted yours from existence.

Sure, you don’t have the money to afford all the fancy gadgets or the wise and caring butler who’ll call you on your shit and suture up your wounds. Nor do you have the lifetime of training spent traveling the globe to become the best at everything (it’s a wonder Batman doesn’t just club his enemies with his oversized ego sometimes). But now you have the traumatic lack of a childhood that in turn gives you the drive to become the Batman…of All-Star Batman And Robin. Soon you’ll be kidnapping kids and forcing them to eat rats, all while shouting “God Damn” with every other sentence.

Thanks to the evil executives at Sony daring to think a vagina was strong enough to lift a proton pack, every man in America shall be twisted and warped by their gutted childhood into the Dark Knight himself.

Look upon what you have wrought, Paul Feig, and tremble.