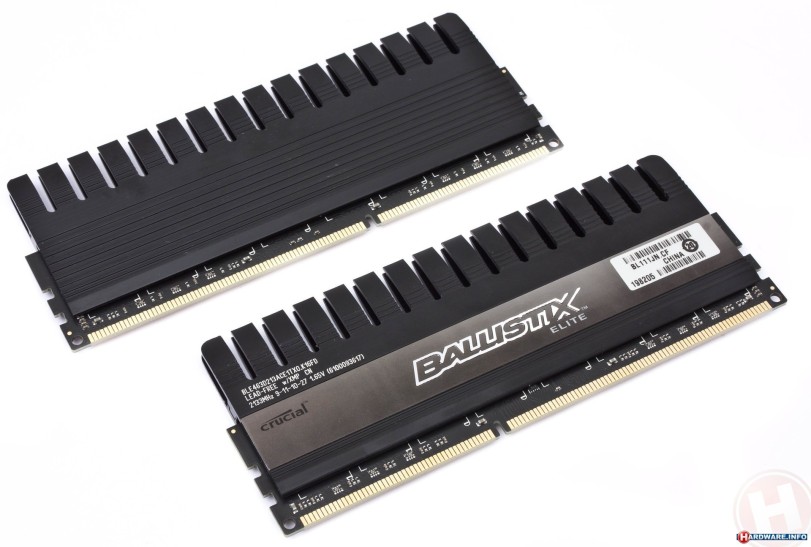 Crucial has been very kind to me recently, having first sent me an MX200 solid state drive and now having sent me a RAM kit featuring their Ballistix Elite 2133 MHz DDR3 high-speed RAM. Of course, I was aware that there was a market for higher-end RAM, but when it comes to PC components, the RAM isn’t usually one I think about first in terms of what to upgrade.

Prior to installing the Elite RAM, my system had G.Skill Ripjaws that were clocked in at 1866 MHz. This is important for me to point out, because the 2133 MHz RAM from Crucial is only 14.3% faster than what I already had. In other words, while I may have noticed some differences between the two speeds, if you’re coming up from slower (mid-tier or budget) memory, you may notice a much more significant improvement.

Installing the RAM was pretty painless, as expected. The RAM certainly does look pretty cool, and the cool shape that it features doesn’t cause any issues with getting it to snap into place on the motherboard. I did spend a moment going into my computer’s BIOS file to verify the reported clock speed of the memory, and it was indeed running as quickly as expected. I didn’t have to change any settings at all, but if you aren’t already using “Extreme Memory Profile” (or XMP) with your current system memory, you may need to toggle that in the BIOS in order to take full advantage of your new memory. My RAM seemed to top out at around 2144 MHz, but your mileage may vary.

One thing you may need to look out for is what channel you install the RAM to in your board. Some boards will limit the overall speed of the RAM if you attempt to dual-channel it, so this is worth considering before you go too far with it.

As far as overall system performance with the Ballistix installed, everything felt smooth and responsive. I didn’t actually time with a stopwatch the different speeds for certain operations, but things did feel like they were 50 to 100ms faster in basic operations, and even more so with operations like launching Steam, my video recording programs, video editors, and other intensive software. In the case of these more intensive programs, I’d say there was easily a fair fraction of a second or more (maybe one second or so for very large programs, like GIMP) of overall speed improvement in terms of program execution.

Because my main OS and major programs/games are installed on a Samsung EVO solid state drive, restart and cold boot times were already pretty fast (just a few short seconds at most after the BIOS splash screen). Here, the Ballistix felt like it further improved boot times, now to as little as three seconds or so from cold boot. Pretty impressive, even though the system was already really fast at start up as-is.

Another good thing here is that I’ve never experienced any blue screens with the new RAM, which is something I worry about when installing new memory like that. So, after having used it for about two weeks, I’m very pleased with the results.

Crucial has a large portfolio of memory available, including RAM and SSDs, and they even have a tool you can use to analyze your system and get memory solution suggestions provided to you. Pretty spiffy, isn’t it?

I won’t provide any sort of score on this one, but I will say that I definitely find that the Ballistix 2133 MHz RAM is well worth the investment!