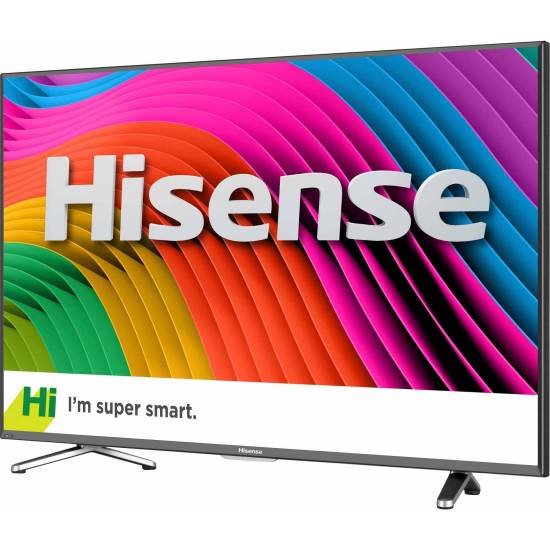 Hisense is an electronics manufacturer that I really knew nothing about until recently. I’d seen their TVs advertised before, but like many, I assumed that they were off-brand and not worth worrying too much about. Yet, some basic research returned the fact that Hisense is actually the owner of a large conglomerate that controls or has major investing shares in a smattering of other companies (such as Hitachi), but if you never looked them up, you’d never know this. At any rate, in my quest to find the perfect 4K large-format display for my main desktop PC, I decided to pick up their 50″ 50H7GB1 model and give it a try. After all, the M50-C1, which I really liked, had to be returned, and this one was offered at a great price at Walmart.

This specific TV currently retails for $548 USD on Amazon, though some retailers offer it a fair amount lower than that.

So, how does this TV stack up against the M50-C1 (reviewed last week) and other comparable models?

Hisense reports that their 50″ 4K model has a native refresh rate of 120 Hz. Of course, as is the case with some models of TVs, there was a chance that this reported refresh rate was actually due to post-processing and its truly native rate was 60 Hz. However, once the TV was plugged in, I checked the different refresh rate options available in Windows and in my Radeon Crimson graphics suite and verified that this panel was able to handle 120 Hz (or 120 frames-per-second) at a resolution of 1920×1080. At 4K, over HDMI 2.0, the TV was capable of 60 Hz, which means that the reported and real rates do match up.

The manufacturer also states that the TV has a “480 Hz effective refresh rate” when Ultra Smooth Motion is enabled. This mode, referred to as “Ultra Smooth Motion Rate 480,” can be either turned to off or set to Low, Medium, or High. Essentially, what this amounts to is frame interpolation mixed with a faster backlight strobing rate in order to approximate the smoothness of 480 Hz as well as the lack of motion blur that such a refresh rate would offer (if it existed; no panel natively supports that!). The smooth effect is quite nice, but as you’ll see shortly, it does have its drawbacks.

Hisense claims that this model can achieve 10-bit color (1.07 billion unique colors), and this is quite accurate. When plugged into my desktop, I was able to select 10-bit “Deep Color” when running the TV at either 4K at 30 Hz or 1080p at 60 Hz. Running it at 4K with a 60 Hz refresh, as expected, meant trading off on the deeper colors for the higher refresh, though the overall color fields present at 8-bit were still quite nice. I didn’t see any cases of either overly-muted or -vibrant colors, and I didn’t feel like I needed to play with the color settings to improve the picture.

The one dowside here though was that text always felt kind of muted and out of focus, and I could never find a way to fully correct this.

Input lag is where the Hisense 4K TV starts to unravel. As I’ve stated before, PC monitors tend to have very good input lag ratings as well as response times (the amount of time between pixel refreshes), but TVs can be a mixed bag in these areas. Unfortunately, despite being a 4K TV, this model has horrendous input lag. Unlike the M50-C1, which rated in at around 18.5ms of input lag with “Game Mode” active and all post-processing turned off, the 50H7GB1 has an input lag of around 125ms. Then, if you were to turn off Game Mode, it would increase to around 250ms of input lag. Now, 1/4 of a second may not sound that terrible on paper, but it means that from the time you press a key on your keyboard to when that letter appears on the screen, it’s around a quarter of a second later, sometimes more. This means that mouse movements are very sluggish feeling (even at a full 60 Hz refresh rate), and this is absolutely terrible for gaming. You may be able to live with it for general, casual PC use, but when it comes to gaming, it’s a big no-no.

Granted, if you only used this display as a TV and didn’t ever play console games or bother with it as a monitor, you might be okay, but if you intend to play games on this, I’d say stay far away. Playing a PlayStation 4 game with that much lag behind it, particularly a “twitchy” game like a first-person shooter, would be incredibly frustrating for most any player.

Now, you can mitigate the lag a bit by turning on Game Mode and “dropping” the resolution down to 1080p, but then you’re only really making use of a quarter of the TVs display power. Ultimately, I think the bad performance is due to a weak video processor in the panel itself, as dealing with a much lighter resolution seems to mitigate it for the most part.

This Hisense TV is very smart capable and comes packed with a variety of apps. This would be great for normal TV use. Also, the menu isn’t sluggish at all, and navigating the settings and smart apps is a breeze.

The TV supports resolutions up to 4096×2160, though I found that, much like with the M50-C1, I had to bump Windows scaling a bit (up to 150%) in order to see things clearly without it being comically small. This isn’t a big problem, but compared to other higher quality panels, it’s not ideal. However, no matter what color space I set it to, I always felt like text looked a little “crushed.”

Ultimately, I think this Hisense would make a decent budget UHD TV for those that won’t care much about console gaming and just want to enjoy movies and shows or browse through the smart apps. However, anyone wanting to use this for console gaming or as a large-format PC display will be very disappointed, and this is a case where cutting some corners to get a budget TV will come back to bite you.

So, for my specific use-case, which was as a larger PC monitor and gaming display, I feel that the screen is mediocre at best, saved from the final chopping block only by its low price and decent performance in areas other than its severe input lag.

Overall, I’d say for a budget 4K TV for movies and TV, this one’s a good deal, but for gaming or PC use, it’s rather mediocre at best.