Far Harbor: How I Learned To Stop Having Fun and Love The Fog

Be warned, fair sailor, thar be spoilers lurking in these murky depths. I shall attempt to keep ’em contained within Davy Jones’s locker, but it’s a wee bit hard to talk about the plot without mentioning the plot unless I pull out hand puppets. *whispers* I am being told hand puppet-to-text technology has not been invented yet. Damn lazy scientists.

If you’re just coming in out of the mists yourself, Far Harbor is the big kahuna DLC for Fallout 4. So grand was its creation, Bethesda came out to brag about its massive size and increase the price of their season pass. The big question hanging over this supposedly massive DLC is: is it worth the $26?

Okay, okay. Let’s begin at the beginning of the quest. Like everything in Fallout, you have to stumble into this DLC by listening to a radio broadcast which points you to visit Ellie at the Valentine Detective Agency.

Before heading out, grab Nick. I don’t care where you left him, if it was months ago and there are dozens upon dozens of places to stick your companions without any way to locate ’em, find him. You will want Nick with you. A good chunk of the plot revolves around our favorite synth’s backstory, and at one point only Nick can unlock a door. So, I hope you didn’t get him stuck in a deathclaw pit or anything, otherwise, happy digging. (Sadly, while we learn more about Nick, no one at Bethesda listened to the masses and let you romance the synth, even if he is fully-functional.)

Nicky’s got you heading north to the only kept up and clean house in the Commonwealth. It’s so nice there’s even water in the sink. I may have spent five minutes dropping things into it to see if any would splash out. In my defense, holotapes are boring as sin to listen to.

It seems their daughter Kasumi’s convinced herself she’s a synth and buggered on up north to a place called Far Harbor that’s also home to Acadia – a mythical synth refuge. You borrow their boat and head off to the new map island, where things start to look a touch creepy.

Note: on the way up to Far Harbor, do not touch ANYTHING! If I so much as bumped the camera control stick, the game went BOOM! Might just be a PS4 thing, but that’s a fun Bethesda bug to look out for.

Climb out of your little automated boat you’re not allowed to steer (I assume you and Nicky water skied in shifts for the two-day trip up north) and you’ll meet the denizens of Far Harbor. They’re sort of our stand-in Minutemen, the humans just trying to survive despite blah blah blah. Of course there’s one jerk who’s trying to get the rest killed, because jerks gotta jerk. Can’t have a horror story without one jerk. 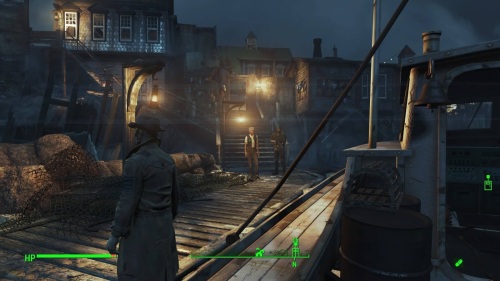 They’re quick to introduce you to the new monsters on the island – Gulpers, which are overgrown salamanders, and the Fog Crawlers, which are awesome. I want one as a companion. I bet it makes creepy wing-snapping insect noises, then leaps on my enemies to suck their brains out through their ear canals. Having bested our newest creepy crawlies which, if you’re anywhere close to level 50+ are not at all difficult to take down, it’s time to find Longfellow and get this main quest going.

I do not like this Longfellow. He’s your standard cliché old man hunter who’s gruff, a loner, and talks about how he’ll make an Island Woman out of you yet (blech!).

Eventually, Longfellow becomes a potential companion. That’s right, another Goddamn male companion. We have three female companions: Piper, Cait, and Curie, to varying degrees of cliché. Try and name all the male companions in one breath. Here we go:

And breathe. Bethesda, you could have done something, anything more interesting than old white gruff guy living alone in his shack. Shit, just making the new companion a woman would have turned your caricature into a character. An older woman, with grey hair, wrapped in the furs of her kills, who doesn’t take crap from anyone. Boom! Ten times more interesting than Longfellow. I’m picturing Mom from Futurama with a harpoon gun. See, already that’s way better.

Is it just me, or is Bethesda running backwards?

All the Trappers (the raiders for this DLC) on the island are male. There isn’t a single woman in the mix, meaning I spent nearly all my time on the island fighting men. Dear God, did I travel back in time to 2005 when we all argued about the feared existence of Fake Girl Gamers?

Even if you don’t care about Longfellow or the companions because you work alone, the plot is a waste of time. It’s a cup o’ noodles microwaved on high that burst through the styrofoam and oozed out of the hole retread of the main game. On one side are the residents of Far Harbor (your Minutemen), on the other the bonkers Children of Atom (the Brotherhood), and finally Acadia (the Institute mixed with a dab of the Railroad). Each faction is at odds with the other for what at first seems an interesting idea.

Upon reaching Far Harbor, everyone kept talking about the fog. This radioactive, deadly fog that creeps across the island. It seems that the fog’s been getting more radioactive over time, and everyone’s blaming everyone else. The Children of Atom bear most of the blame because, you know, crazy, and their idea of Christmas is finding a new cluster of tumors. Then there’s the mystical DiMA, a prototype synth who shares something in common with Nick who’s running Acadia. He claims that the Children of Atom had nothing to do with the fog, but can’t remember why. For “plot reasons,” he’s missing most of his memories. Seems DiMA used to be in tight with the Children of Atom until their High Confessor “disappeared mysteriously” and the new guy kicked him out, keeping his long-stored memories for himself.

That creeping fog is kinda cool to watch, rendering an almost gothic and consumptive feel to the DLC.

But after having to suffer through the same desaturated misty view for hours and hours struggling to spot anything on the island, I got real sick of that damn fog. My only salvation was the idea that the main plot would let me solve the radioactive fog question and clear some of it for the people, maybe reveal the hidden beauty on the island buried below the rendering that put me in mind of the look of Fallout 3 – brown, featureless, dull, super mutanty. (Can anyone explain to me how there are so many super mutants and no female ones? It’s starting to really bug me now.)

Yeah, that doesn’t happen. The fog question, never answered. Why the Children of Atom’s previous High Confessor vanished, also never answered. The main questline is so damn short I finished it without even realizing it in about four hours (with a lot of wandering in between). It is the most linear main plot I’ve ever stumbled across in a Bethesda game, and that’s saying something. No surprises, no shocks, not even a what the hell are you thinking?! If the plot were a math question, we’d be eating the same number of apples and wondering why all our siblings are the same age. It’s that bloody boring. There were things remaining to explore across the island, but I was expecting something new like an addition to the Fallout lore, to the world, to at least crack open any new theme beyond a replay of synths versus humans.

There is one new section of gameplay that will have you tearing out your hair and cursing Fallout‘s shitty controls. And it’s, of course, required.

Welcome to DiMA’s memories, an area you have to sift through to conclude the — I guess we have to call it a plot. It’s like if the Geth Node in Mass Effect 3 and Portal had a really stupid baby that was also infected with lice.

You know how when building your settlements, when you put down a table or chair they always come out backwards facing the walls? Imagine having to get a chair lined up just right, meters above your head, with only enough space to turn once around before you fell to your doom and have to start all over? That’s trying to get through DiMA’s memories.

The puzzle itself is a typical Bethesda one where they think they’re more clever than they are. It’s not too bad, especially if you’ve ever played Portal — the teeth grinding comes in trying to accomplish it in tight quarters and boxes refusing to line up. If you haven’t played it yet, you’ll see what I mean. If you have, you’re already nodding in agreement and probably trying to fish a controller through the hole in the wall where you threw it.

My biggest problem with Far Harbor is that it’s not interesting. There are a few little fun things, but by all that is good and holy, it is not worth the $26. I keep comparing it to another island DLC from Bethesda, The Shivering Isles in Oblivion. That thing was freaking huge, with interesting dungeon crawls and a main story that didn’t go A to B to C you’re done. Bye! There are almost no buildings to enter and explore on Far Harbor, only their Vim Factory (which is the obligatory Nuka Cola competitor that makes you smell like lobsters, apparently). Other than that, it’s a few boats and ruins which you can barely see because of the unexplained fog. All-in-all, dullsville baby.

It adds nothing to the world, raises no interesting questions, and gives us barely any memorable characters. Longfellow is a snore, a snore I want to punt off a cliff. Honestly, about the only interesting one is Nick and his familial revelations, but even that’s brushed off in true Bethesda fashion with an, “I don’t want to talk about this ever again.” Emotional arcs are too hard, so just pretend nothing happened. At this point, it feels like Bethesda (and Fallout in particular) have completely abandoned any attempts at telling a story. Which wouldn’t be so bad if their bread and butter of exploring was fun, instead of stumbling across a few shattered houses, picking through the remains, killing a Super Mutant, and cursing at the fog.

Unless you’re a completionist or really like fog, I say give Far Harbor a pass.