Because everything and everyone courting the nerd dollar strives do tie ins, 4-26 is Alien day. While McDonald’s skipped on including a chestburster burger on the menu due to worries of nukings from orbit, Reebok planned to release 426 copies of Ripley’s (who’s a woman) shoes (who would have worn woman-sized shoes).

You can guess where this is going. 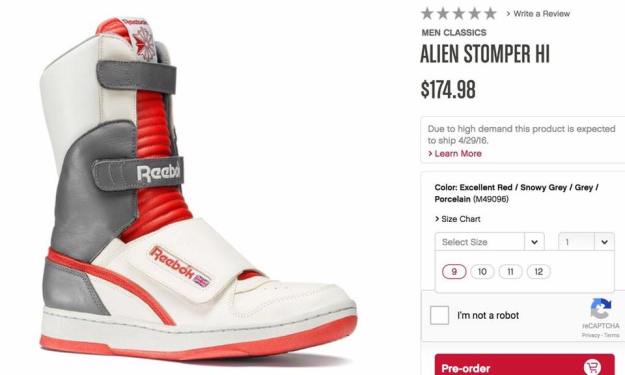 Yes, that’s right. One of the biggest women sci-fi heroes was honored by having her shoes sold only in men’s sizes 9-12.

Oh, but men who don’t get the point are quick to whine, “What’s the big deal? You ladies just need to get over labels.” Except a men’s 9 is really more like a women’s 11. How many women out there wear a size 11?

“But,” the men continue to whine, “women don’t spend money on geeky stuff. Everyone knows that, and Reebok, who made a limited line for promotional purposes, were worried they wouldn’t sell out instantly. Ladies never, ever buy anything from their favorite fandoms.”

It’s shit thinking like that that got Young Justice cancelled, so everyone who spouts that needs to have the War Planet shoved up their backside.

Women geeks didn’t spring fully-formed from Athena’s forehead. We’ve been here, we’ve always been here. You can ask Mary Shelly (once she’s finished once again explaining who is and isn’t the real monster in Frankenstein). Sadly, the only way to get heard is to keep making noise, rewarding the companies who consider lady geeks to exist, and slapping the forehead of idiots who think we don’t.