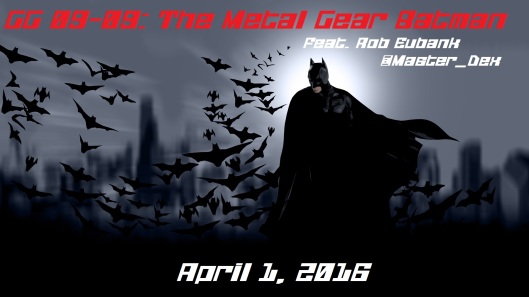 This time around on The Gaming Goddess Podcast, Rob Eubank returns to hit on and build off of a couple things he mentioned the last time he was on the show: Konami’s treatment of Kojima at the 2015 Video Game Awards show, the possible future of the Metal Gear Solid franchise, and about his experiences last year with Batman: Arkham Knight‘s PC release.

For me, the conversation about Kojima and the MGS series is interesting because it reminds me of what happened with Keiji Inafune and his departure from Capcom in late 2010. Inafune was involved with several staples of the company, including both the Mega Man meta-series and Street Fighter, so a lot of people were upset when he left. Capcom has stated that they’ll continue to develop Mega Man titles, but fans still don’t think it’ll be the same without him. Then again, there’s always the hope of Mighty No. 9 and Azure Gunvolt.

In any event, we get to talking about a lot of that stuff and then some, so it should make for a fun episode!

Music this time around is borrowed from Batman: The Video Game on the NES!

As always, feel free to subscribe to the show on iTunes and, if you wish, grab the MP3 here.