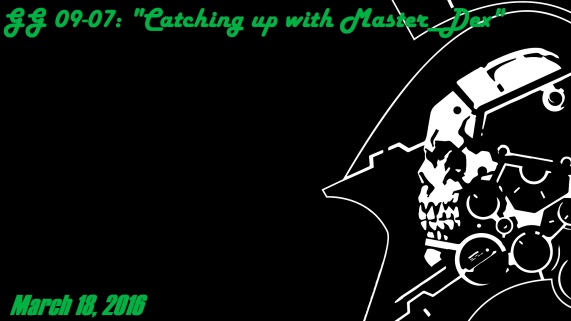 For this episode of the podcast, we have the treat of having the ever-awesome Rob Eubank (a.k.a. Master_Dex) making his Season 9 debut. Rob has been a fan-favorite here on the show for some time, and every time he’s on the podcast, people have good things to say. They generally seem to enjoy our conversational banter and the random topics we get into, and Rob also usually brings up some interesting things to think about.

Rob and I spend a little time catching up, then we talk for a bit about virtual reality and whether or not VR will end up being a niche fad or if it’s really going to take off in the coming years. We discuss (briefly) the Oculus Rift, Samsung Gear VR, HTC Vive, and the PlayStation VR and what some of the strengths and weaknesses are that we perceive. Then, he tells me about his new Surface Pro 4 and brings up the topics of Konami’s treatment of Kojima in regards to the 2015 Game Awards and Batman: Arkham Knight. Both of those latter two topics, however, will need to be revisited in an upcoming episode of the show.

As always, good times ensue and fun things are discussed! I’m certainly looking forward to the next time Rob can drop in on us!

The show is, of course, available on iTunes (linked above), but you can also get the MP3 directly here.