Living through an apocalyptic event and losing your loved ones (and life) as you know it seems bad enough right? But that’s not where it ended for young Amy. Shardlight, a new point-and-click adventure by Wadjet Eye Games, tells the story of Amy Wellard, who not only survives ‘the bombs’ as a child, but grows to adulthood in her neighborhood, now a post-apocalyptic slum. This modern adventure will please even the most discerning fans of the genre.

Amy Wellard, a twenty-something lady who survived a horrible disaster as a preschooler, takes us through her world as she struggles to cope with contracting “green lung”, a plague that’s infected the population since the bombs fell. Amy reluctantly takes a government position in order to gain an opportunity to win some of the vaccine for green lung.

Amy’s personal development coincides as the plot unfolds, but does feel singular at times. Her determination and bravery is believable, but it would have been nice to see a glimpse of personal emotional conflict from time to time. Her personal struggle no doubt feels hopeless at times, but we never see her determination waiver or doubt. Her goal-minded focus propels the plot forward, but there’s room for even a tidge more emotional depth. 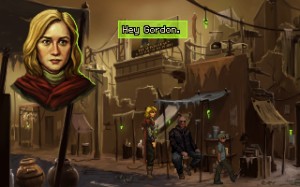 Amy, the other villagers, and her friends are all very diverse without being ‘caricatures’ or parodies of people; they’re believable people connected by disaster, survival, and tenacity. As you get further into the game, the characters become more convincing, with challenges and back stories of their own. One of the key reasons why the characters feel more important than mere plot devices is the fantastic voice acting. With conviction and the subtlety and nuance of inflection, the actors managed to ensure realistic delivery of the dialogue. 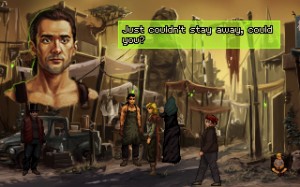 Shardlight’s detailed pixel art world is one that’s gritty, yet beautiful and diverse. From the neighborhood slums, to the well-maintained buildings of the aristocracy, to the outskirts of the city, each area is rendered with an exceptional attention to detail. The biggest compliment I can give, as a striving artist myself, is that after spending time in the artistic treatment of Shardlight’s world and characters, I was inspired to make art myself, and that’s just what I did. The character portraits are among some of my favorite artistic elements in the game.

The music and environmental sounds in the game are also extremely well-done and add to the somber and oppressive atmosphere in some areas while being slightly more subtle in others. The flocking of birds, the megaphone announcements, and other environmental noises all act together with the graphics to immerse you in the game world so you can focus on the puzzles and challenges.

As with any point-and-click adventure game, you want to make sure there’s a good inventory system, visual clues, and challenging puzzles; Shardlight has all of these elements in a marriage that feels just right. Puzzles start out easy enough and through lots of clicking you learn to explore anomalies in the environment. It’s easy to get caught up on puzzles throughout this game because it doesn’t hold your hand. I will disclose that I did have a walkthrough handy, but thankfully I only found myself in need once, maaaaaybe twice, towards the end of the game. But with time and more patience, I’m confident that I didn’t truly need those hints. The game design is such that the puzzles increase in difficulty as you get further into the game, which is exactly what you want in level design. Your ability to find clues and piece them together to solve the puzzles will increase as you progress. 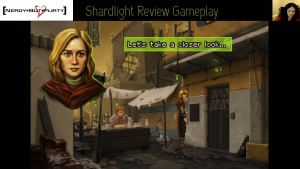 The game has Steam achievements, so if you’re an achievement hunter, you’ll have fun finding those. A few popped up for me, but in the interest of not-spoiling anything, you’ll have to do a little digging yourself to find the whimsical ones.

I spent just less than 12 hours with this game from front to back, but that was a leisurely play. You can probably expect a good 6-8 hour playthrough if you’re more adept at puzzle solving than me (which is most likely).

I’d be lying if I told you that my Shardlight experience fell short or that Wadjet Eye Games missed the mark with this one. The production value, the key elements of the point-and-click adventure games I loved from my past, the standout voice acting, and the modern pixel art world that immerses, have all become synonymous with the publisher, and Shardlight does not disappoint. If you haven’t played a point-and-click adventure, or haven’t played one in a long time, Shardlight will be a dalliance with this genre that you won’t regret.