What is “Plus Sized” Anyway?

Ashley Graham Teaches Us All to Love Our Bodies 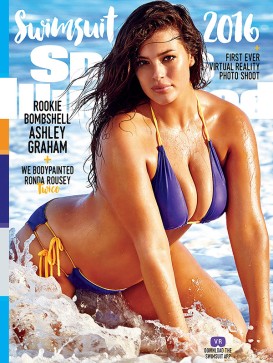 Ashley Graham on the cover of the Sports Illustrated 2016 swimsuit issue.

Six years ago, I was so afraid of the term “plus-sized” that I did everything I could to avoid becoming it. I was in the best shape of my life. I’d lost over 50 pounds, I was a size six, and I was attractive by many standards. I was (mostly) happy, and I was proud of myself for striving for and accomplishing the beauty standard that I never felt I could reach. Then, I went on a cruise. I did spinning classes every day. I ran on the track every day. I watched what I ate. And when I came home, I got on the scale, and I had gained seven pounds. SEVEN POUNDS. I was devastated. How could I have gained seven pounds when I worked so hard? Why was I keeping myself from all the foods that I love just to meet an impossible standard? I was 138 pounds. A whale. I went to the freezer, grabbed some ice cream, and started on the path to gaining 30 of the 50 pounds back. I lost that beauty standard for which I’d worked so hard. And over what? Seven. Pounds. Never once did it cross my mind that it could have been muscle I was gaining. Never once did it cross my mind that seven pounds would be easy to lose. Heck, I had just lost more than 50. The only thought in my head was “you are fat, and you’ll always be fat, so why even try?” I had become the one thing I was so afraid of – plus-sized.

This week, Ashley Graham made history as she became the first “plus-sized” model to grace the cover of a Sports Illustrated swimsuit issue. It made headlines everywhere, proving that “sexy” and “beautiful” isn’t measured in pounds or dress size. As I stared at Graham on the cover, gazing at a woman who looked like me in a lot of ways, the words “gorgeous” and “beautiful” entered my mind. The words “plus-sized” didn’t. But those words shadowed every article, every conversation, about her. This woman graces the cover of a magazine that exemplifies what many believe to be the epitome of the American beauty standard, and still, she isn’t good enough.

Although the media coverage of Ashley Graham’s cover was mostly positive, in everything I was able to find, she was labeled as “plus-sized.” The coverage had good intentions of broadcasting how great it is that Sports Illustrated is attempting to change how we view beauty; however, using the term “plus-sized” so consistently suggests that this is something that shouldn’t be there, that it’s radical and revolutionary that a “plus-sized” girl can be on the cover of a magazine. And the sad thing is that it is.

Lane Bryant first coined the phrase “plus” in 1922 as a means to advertise larger-sized clothing for women who didn’t meet the boyish figure beauty ideals of the time. The term initially referred to clothing, not to women, and was meant to be empowering. Turns out that society twisted the term’s meaning to refer to people, and the term became less empowering and more marginalizing. Many people still hold to those same boyish figure beauty standards that have been around for decades. Commenters on Si.com and PeopleStyle do not think that Ashley Graham should be placed on the Sports Illustrated swimsuit issue pedestal.

“Plus-sized” doesn’t deserve the attention of a magazine cover. “Plus-sized” deserves to be banished, hidden, and locked away in a windowless room, shamed into oblivion. “Plus-sized” isn’t beautiful. It’s embarrassing. Even though approximately 67% of America’s population of women fall into this category. Women like me, like that 67%, are not well-served by “plus-sized” marketing, because that marketing isn’t empowering; it’s insulting.

What does the term “plus-sized” really mean, anyway? What is a “plus-sized” woman adding to herself? Another person? A gorilla on her back? The burden of never being good enough? When does someone go from being just a person to being a “plus-sized” person? Who determines that line? Ashley Graham is one of the most beautiful women out there, and yet, this label gets stuck with her because, Heaven forbid, she’s a size 16. She’s not pretty “for her size.” She’s gorgeous, period.

We don’t need to see more skinny models. We already know that skinny is beautiful. And it is. But it’s not the only kind of beauty, and by choosing Ashley Graham for the cover of their swimsuit issue, Sports Illustrated is making that statement.

Assistant Managing Editor for the issue, MJ Day, stated in an Si.com article:

Beauty is not cookie cutter. Beauty is not ‘one size fits all.’ Beauty is all around us and that became especially obvious to me while shooting and editing this year’s issue. […] Ashley Graham is a sultry, feminine masterpiece. I dare you not to stare at her. Ashley commands your attention in her photographs. She owns her sexiness in a way that every woman should. Her confidence is contagious.

If we begin to see more diverse bodies, more realistic bodies, in magazines, on runways, in ads, on the internet, in movies, and on television, maybe we would become a little more comfortable that women of any size can and do look good in clothing, in swimsuits, and *gasp* bare naked. We need more companies in the fashion industry and in Hollywood to follow Sports Illustrated’s lead and begin representing women better, because exposure matters.

Six years after my cruise crisis, I’m 30 pounds heavier and beginning to become more comfortable with my body. Seeing Ashley Graham on the cover of Sports Illustrated made me realize that maybe, just maybe, society is beginning to give me permission to just be who I am. Not the person who would be prettier if she lost weight. Not the skinny person who is hiding inside of a fat person. Not “plus sized.” Just me. And like you, I’m beautiful.

5 thoughts on “What is “Plus Sized” Anyway?”