Well this was a tough week of television watching. Granted, I ended up seeing most of my shows in the span of 24 hours, so the emotions were non-stop. I won’t be doing that again! I’ve got a lot to say about each of the shows I watched, so I’m going to jump right in. Don’t worry – no spoilers! 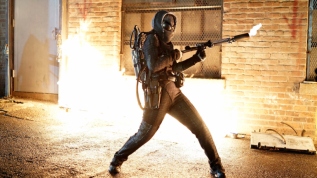 I miss The Joker. More specifically, I miss Cameron Monaghan as The Joker on Gotham. I find myself a bit bored these past couple of episodes. When will he be back? He is coming back, right? The thing about doing reviews, or even these brief recaps, is that I avoid all other reviews and most news on the shows. I want my brain to be a clean slate as I take the stories in. I may have to hit Google later though to see the status of Jerome/Joker in future episodes. I had to discuss him, because it’s possible my missing him is jading my views on the show. I felt, as I did last week, not quite so interested in the episode. I would wander online or to a game as the show played.

Penguin wants to be Galavan’s partner, but of course Galavan immediately laughed that off. So Penguin is scheming and investigating Galavan, while desperately trying to get his mother back. Galavan approaches Gordon for advice and asks for his endorsement in his mayoral run. GDPD is performing a lot raids now that Captain Barnes is in charge and vowing to end corruption in the city.

We do learn of an interesting connection between Galavan and the Wayne family. It makes a lot of sense now exactly what Galavan’s motives are and where this is headed. In the meantime, Gordon and his precinct are chasing after arsonists who are connected to Selina. This storyline appears to intensify next week, as we delve deeper into the latest “monster” of the series, Firefly. 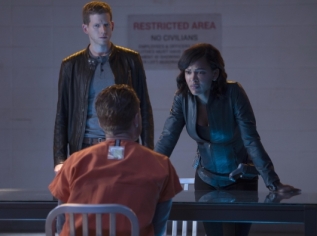 It’s Vega’s birthday, and she reacts to people making a big deal of it the same way I do. Though, she has good reason (I’m just a strange introvert who doesn’t like big deals made about me ever). Her father was killed on her birthday, so it’s obviously a difficult occasion for her. Dash’s latest vision reveals that Vega may be in danger.

The investigation has several twists and turns, and again forges the relationship between Vega and Dash. It also proves how totally fierce Vega is. I would like to sign up for her personal defense class! We see even Arthur step up to assist Vega with the investigation into her father’s death. He claims such help will never happen again, but I suspect Arthur is leaning more toward his brother than Agatha at this point. There was a pretty intense mind-melding scene, which hopefully will eventually give Vega some closure.

In the future, the team in D.C. is the “Washington Redclouds,” which I thought was a great touch by the writers. I liked delving deeper into the characters’ pasts. Each week, this show continues to be one of my favorites. 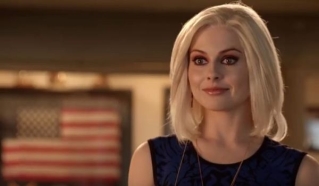 I’m not going to call Rose McIver the next Tatiana Maslany, but she did nail the role of “real housewife” in this week’s episode. It was pretty amazing and someone please tell me that “Sorry, Beyoncé” nail polish is a thing?!

The story itself played exactly as one might imagine a real/desperate housewife story to unfold. There’s a lot of drama and shopping. Max Rager continues to earn his name. Ugh, he’s such a douchebag! Poor Major is stuck doing his dirty work, and it’s really taking a toll on him. Liv’s roommate has a great wardrobe, but remains totally evil.

Someone I really adore made a return. It was Liv’s birthday, something she didn’t want to celebrate or even think about. She returns home at the end of an exhausting day to find that someone left her a cake. I hope this person is back for good. We shall see! Don’t forget to check out Sabrina’s awesome iZombie recap!

The two best lines I’ve heard on TV in awhile. It’s said in conversation between James March and Tristan, as March further details his plans with the model-turned-bloodsucker. James March reminds me of a mix between DiCaprio’s Gatsby and Depp’s Ed Wood. He refers to the Cortez as his “Murder Palace,” which is quite charming, don’t you think? The performance by Evan Peters is over the top, but I rather like it.

Gaga is Gaga is Gaga. I mean, she looks amazing in every scene and whatever she does, you think, “yeah, entirely possible,” so I’m biased and don’t know what else to say on that. Poor Countess, she lost a good chunk of change to Bernie Madoff (yes, really!). Gaga and Tristan are trying to rid the hotel of Donovan as he attempts to make plans at remodeling.

Quick bits: Sally and Iris have a heart-to-heart over some needles. John and his officers continue investigating the deadly sins-style serial killings. Alex and John continue having marital problems while each battles their own inner-demons. Alex visits John at the hotel to sign some papers, but on her way out sees something that could change her life.

Finally, Angela Bassett makes her appearance! Oh, my, she is Ramona Royale, a B-movie queen full of everything awesome. There’s a montage between her and Gaga, and yeah, need I say more? There’s an intense story between the two, and her presence will surely spice things up even more. Great music, as always, and enough stunning visuals to keep me coming back for more next week. 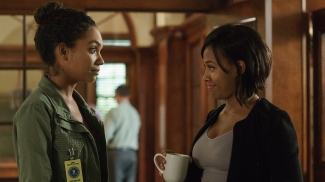 Straight away, we see a creepy monster attacking a little girl while her sister looks on, screaming from her own bed. When I say creepy, I mean terrifying. The effects and costume design were done as well and as freaky as more recent horror films. The whole acrobatic crawling around and head being upside down creature is a bit cliché. Still, I liked it.

Crane is playing video games instead of studying for his citizenship test. He’s also text-happy, even using emojis! 2015 is going to rot his brains! Jenny and Abby discuss their father a lot, as the story between the two young girls unfolds and they feel similarities to the sisters. There were some parts I had to just overlook, where it seems they were speaking to minors without their parents’ permission. But then again, monsters! I’ve been watching too much Law and Order…

The monster is after kids with loose teeth. The open space from a lost tooth is how it enters ones’ body, and then you’re a goner. If children only knew how evil the tooth fairy actually is! There’s plenty of cool fight scenes with this monster. We’re getting closer to sorting out exactly what Pandora is all about and what her plans might be. Crane is, once again, loopy at the end of this episode, and yes, it’s adorable.

The Bones / Sleepy Hollow crossover happens this week! I am stoked and will be live-tweeting on Thursday.

Doctor Who – “The Woman Who Lived”

Ashildr (Maisie Williams!) is back, though she no longer goes by that name. Lifetimes of solitude have caused her to refer to herself as “Me” and have complete independence. Naturally, we see it’s more from hurt of eternally living while all others you know perish. She has become quite the badass though, and that was certainly fun to see.

In a welcome twist, The Doctor becomes her companion – though she refers to him as a liability. He reads bits of her journal, and they’re heartbreaking. Me is also the girl who waited. We see how hurt she is, both by her immortal existence and feeling abandoned by The Doctor.

There’s a scene at the end, one that made me question Me’s future and her possibly more malevolent role yet to come. Also, The Doctor tells Clara he missed her, and that had me feeling some things. Osgood appears in next week’s episode! I can’t wait!

The Walking Dead – “Thank You” 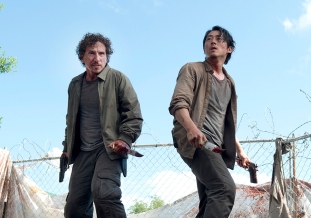 What is there really to say? I’m going to need at least a week or more before I can really properly discuss this episode. If you’ve somehow avoided the big thing that happened on this episode, congratulations. But also, wait, why are you reading this? Why are you online? Get out! Go hide in a cave until you’re able to watch it. Actually, stay in that cave and don’t ever watch it. Have a good, happy life…

So the other stuff? The less-brutal and heartbreaking bits? Rick and his crew are reacting to what we saw in last week’s episode. The horn has The Herd going towards Alexandria, and all hell is breaking loose there. Rick, Michonne, and Glenn all split up and devise various plans to distract the walkers who have started heading toward the compound. Daryl and his squad continue driving to lure the walkers away from Alexandria. It’s basically an utterly chaotic and terrifying mess. These walkers are looking so disheveled, it’s disgusting and awesome all at once.

I’m pretty sure I say this every week, but if you gave up on The Walking Dead at some point, just start watching this season. I don’t think you’ll regret it.