Gen Con 2015 was a blur of amazing-ness. There are so many new games that are awesome that I had to narrow my list down to the ones that I’m MOST excited about. 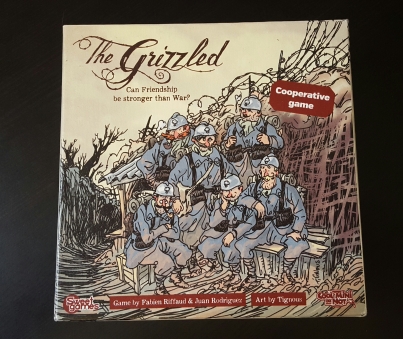 Players take on the role of French soldiers in World War I. You can choose your difficulty level, which means how many cards are in your hand. On your turn, you can either play a card from your hand or withdraw. There are two types of cards; ones with symbols on them (night, rain, bullets, gas mask, etc) and ones with a lightning bolt and text on them. If you play a symbol card, it goes into the river. If you ever play a card that would cause you to have three of the same symbol, you lose. If you play a lightning bolt card, it goes in front of another player. That player then has to suffer that condition, which will be described in the text, and take the wound represented by the lightning bolt. If a person ever has more than four lightning bolts in front of them, they lose. If you withdraw, you keep your current set of cards and then play a support token onto another player.

So why not just withdraw? It’s risky, because there are two decks of cards, one that you draw your hand from and a second deck. The point of the game is to try to deplete the draw deck and show the peace card at the bottom. If you manage to do that, you win. But if you withdraw with cards still in your hand, cards from the second deck get added to the top of the peace pile. If you ever deplete the second deck, you lose.

I didn’t really have any expectations when I sat down to demo this board game. I was really surprised at how much I love it. The mechanics are very interesting, the art is beautiful, and the theme really comes through. It’s quick to learn the rules, but difficult to actually win. I highly recommend this game!

You and up to five other people are playing as witches. All of you are vying for the position in town of the village crone. In order to attain the coveted position of head witch, you have to prove that you’re the most powerful witch. You accomplish this by collecting ingredients and casting spells to complete your scheme cards. The first witch to hit 13 points triggers the end of the game. Every witch gets another turn, and then you count up points.

The Village Crone is a mix of a worker placement and resource management. Each witch has familiars they can move around the board and use to collect ingredients. Witches can also move the villagers around, which they’ll need to do to complete their schemes.

The game is really fun to play, the art is beautiful, and the theme is awesome. One of the mechanics that makes the game super enjoyable is that every time you cast a spell, you have to say the incantation too. It helps players get into the spirit of the game.

The game lasts around an hour and a half and costs $50. It will be available to buy on September 16th.

I’m so crazy excited for Mysterium. It’s a cooperative game with a bit of a twist. Normally in co-ops, players work together against the game. But in Mysterium, one player is giving clues, and the rest of the players are working together to solve the mystery.

The lone player is the ghost of a murder victim, and they’re reaching out to mediums to help solve their murder. The ghost cannot talk to the players. The only thing they can do is give picture cards as clues. There are three rows of cards in the center, one with people, one with places, and one with weapons. The mediums must figure out what their trio is before the group can actually solve the murder.

The game is so much fun. Both sides of the game are fun to play, though it can be hysterically frustrating to be the ghost, because you have to listen to everyone make assumptions about your clues and you can’t correct them!

There were limited copies at Gen Con, so I didn’t manage to snag one for myself. I’m not sure exactly when we’ll be seeing it in stores, but it should be soon. The game costs $50 and takes around 30-45 minutes to play.

Get your politics ready, it’s time to duke it out on the campaign trail. You play as the heads of the Republican, Democratic, and Independent parties. The point is to travel around and drum up supporters and secure control of those necessary electoral college votes. You will have to manage your finances, buy (yes, seriously buy) voters, court political supporters, and try to steal votes from the other players.

Before you start getting worried that this will ruin your friendships because of hot button issues, I can tell you the creators already thought of that. When parties take a stand behind a particular issue like nature or gas, they aren’t taking a specific side to the issue. Instead, in the game, the candidates are throwing their weight to the issue itself. Mechanically, this will help them get key votes in states that care about that issue.

What really excited me about the game is their vision to use the game as a teaching tool. They’d love to make a teaching edition with either magnets or those fuzzy balls, so that when the kids have courted votes in a particular state, they can get that tactile satisfaction from sticking it right to the map.

Definitely be on the look out for this Kickstarter; it’ll go live on September 16th. I had so much fun demoing it that I actually played for an hour before I realized that I’d been there so long. The designers say it takes around 1-2 hours to play, and I think goes up to six people.

This was actually one of the biggest surprises for me at Gen Con. At first glance it seemed to me like it was going to be just kind of a meh party game. Boy, was I wrong. Yes it is a party game, but it’s incredibly fun.

The players are divided into two teams, each with their leader. Everyone is looking at the same grid of 25 cards with one word on each card. The team leaders are looking at a randomly drawn grid which shows them what cards they’re trying to get their team to guess. The only clue they can give their team is one word and a number. So when I was trying to get them to guess two cards, in this instance “bear” and “cat,” I gave them the clue “fuzzy, two.” They managed to get the right answer, but they did hesitate because there was a card with the word “sock” on it.

So, the catch is that there’s one card that’s an assassin and there are many neutral cards. If the players accidentally guess a neutral card or the other team’s card, their turn is over. But if they guess the assassin, they lose. Whichever team guesses all their cards wins.

It only takes about 15 minutes to play, and it’s super fun. It can be really hard to think of a word to connect two disparate things, especially when you have to try to make sure they won’t guess a similar word! At the moment, the pre-orders are closed, but it should come out in September.

Take on the role of the daughters of the queen. Your mother is aging and will soon die. Compete with your sisters to have the most distinguished court and bring the most prosperity to your land so that you can clinch the title of heir.

Each turn, the players can either tax or harvest, and then buy cards from a center row of face-up cards. You can also choose to upgrade the cities and the fields, which will help you harvest and tax more. But upgrading those places will also help out your opponents. There are also events that will come up when you replace cards in the river. Those events happen immediately and affect everyone.

One of my favorite kinds of cards are the unwelcome visitors. When you buy those, you place them in someone else’s court. At the end of the game, those cards take away your victory points. Unwelcome visitors are a nice addition, but you have to make sure you’re not using up too much of your money buying those instead of buying cards that help you.

It takes about 45 minutes to play. I’m not sure exactly when it’s coming out. They were recently successfully funded on Kickstarter and are waiting for their games to come in. I was able to pre-order a copy at Gen Con, so hopefully they’ll be out soon! 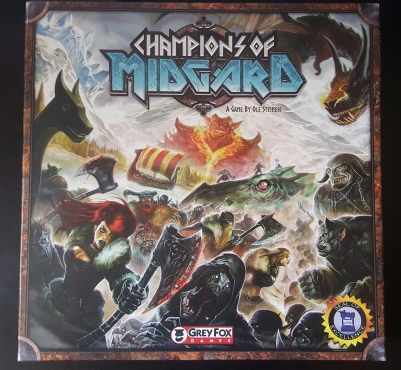 If you like Lords of Waterdeep, you’re gonna love this game. Champions of Midgard is a viking-themed worker placement game. The Champions are trying to protect their town from trolls and other monsters and gain glory to become the next Jarl.

The main difference between this game and Waterdeep is that instead of just collecting fighters, you’re collecting attack dice. So when you attack a troll, you roll your dice, which means you might not succeed, and if you don’t roll any defense, some of your dice might die. There’s also a cool mechanic where you gather your soldiers and sail across the sea to fight bigger, scarier monsters – but you have to flip a condition card, which could mean some of your soldiers don’t make it. That element of chance makes the game exciting and sometimes a bit frustrating.

It plays around 60-90 minutes and costs $60. Again, this title isn’t quite out yet, though I was able to snag one of the few available at Gen Con! It’s slated to be released sometime in quarter four. 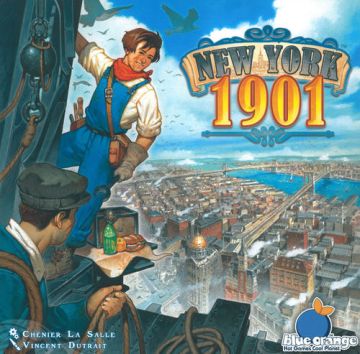 New York 1901 is a game that many are comparing to Ticket to Ride, and yes, there are some similarities. It’s around the same level of difficulty, and players also use color-coded cards to build. But 1901 is a little more in-depth.

Players take on the role of developers trying to gain glory and prestige by building the best buildings in the city’s financial district. The cool thing is that you can demolish your less awesome buildings and build new, better buildings over them. Once you buy the plots of land, they’re yours for the rest of the game. The trick is buying up plots of land in the best positions. Buildings on certain streets are worth more extra points at the end of the game.

It takes about 30-60 minutes to play and, again, isn’t out quite yet – should be released in about a month or so. 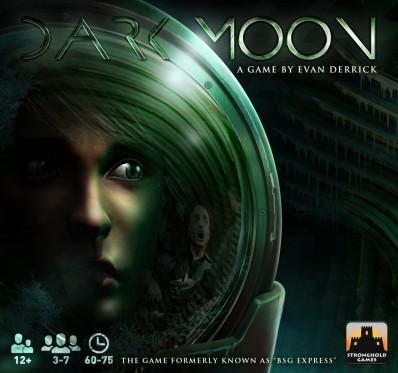 I’m super excited about this game! It originated as a free print and play called BSG Express (Battlestar Galactica Express). I love BSG, but it does take like 6 hours to play. When I heard there was a similar game that took only about an hour to play, I freaked out.

Game play takes around an hour. The game costs $60 and just came out on August 5th. If you love betrayal and hidden role games, this should definitely be on your radar!

Ashes: Rise of the Phoenixborn

I love Ashes. I’ve actually been waiting for this game since I talked with the designer at Gen Con 2014. It’s an expandable, deck-building card game that uses dice as a power resource. If you’re interested in more details about the game, check out my review article! It takes about 15-30 minutes per player and costs $50.

What new games are you most excited about?!