I was really excited to play this game. No, you don’t understand. I was REALLY excited. Like, bouncing off the walls excited. Progress: Evolution of Technology is a game about evolving your civilization with different technologies and cultural practices. Doesn’t sound exciting to you? Just wait until you’re racing with your friends to be the first civilization to invent the opera or the atomic bomb.

According to Passport Game Studios, the publishers of Progress, you “guide your nation’s research efforts through a maze of technologies from the earliest signs of human development, moving progressively through the Antiquity, the Middle Ages, and the Renaissance until the first sparks of the Industrial Revolution.”

For anyone who knows me, you would understand why I was so excited to play from that description. For those that don’t know me that well, my degree is in Anthropology, the holistic study of humans and their culture. Yeah, the ability to play as my own civilization and learn different technologies is super appealing. However, if you don’t love civilizations as much as me, you can still have fun!

You start in Antiquity, where you learn technological skills like masonry and crop cultivation before moving on, slowly gaining more difficult technologies, like metallurgy and organized religion, until you reach the Industrial Revolution. Or, if you want to play longer, until someone develops the atomic bomb and you’re all f’ed! (No one’s really f’ed, but the game will end.)

So let’s start with the good stuff. First off, Progress can be played with 1-5 people (or with teams to increase your player count for big parties), so I can play alone when I’m feeling antisocial or with a group of people for those rare moments of extroversion! Secondly, there are so many different technologies to learn and so many different paths to go down. For instance, I developed burial practices early on and then spent the rest of the game avoiding all organized religion. 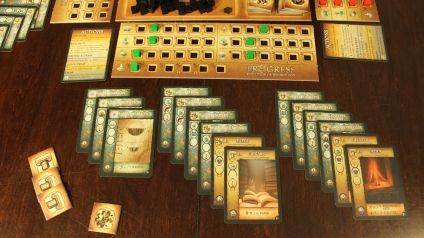 Certain cards only need a little knowledge to develop, while others have more requirements. Burials didn’t require that I know any other technologies, but the organized religions required that I have burials, for instance. The further into the game you go, the more difficult it becomes to have the prerequisites for technologies. Luckily, the game has a research aspect, where, if you don’t have the prereqs, you can research the card for a certain number of turns and then it becomes active. So you can totally start writing poetry before you learn the alphabet.

The game can be played strategically, or, if you’re like me, you can play whatever technologies you want to learn and still somehow not lose. Each technology you activate gives you different rewards. Some move you to the next stage, others reduce the time it takes to research, and a so much more. The game has a lot of different mechanics, but it’s not difficult to keep track of, and you can always customize the game based on the difficulty level you want. 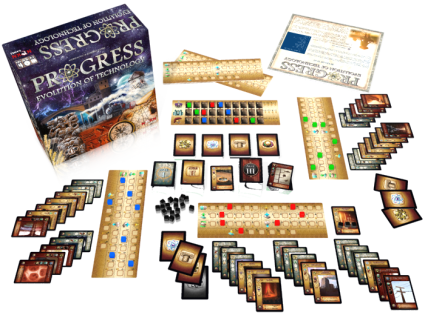 I’m trying to come up with some drawbacks, but I’m honestly still just so happy that I got to lead my civilization through adopting burial practices, philosophy, metallurgy, and the opera. The game isn’t perfect, but it’s a ton of fun and has made me geek out something fierce. I’d definitely recommend it!