For many years now, the idea of an “HD Remake” has been the “in” thing. Developers love to go back, revisit some of their older games, and revamp them for modern high-definition (and even UHD) displays, fixing bugs and making an overall superior version. Is it just because they want you to enjoy the game? Eh…it probably has more to do with them making a whole slew of money from a game one more time by getting you to want to play it with all the shiny new visuals!

In any case, there are lots of games that never get these treatments. But, thankfully, some emulator tool sets can help you turn just about any game into an “HD remake.”

In terms of previous Nintendo consoles, the Dolphin emulator can do just this with any Wii or GameCube title. As you (hopefully) know, these systems both used 640×480 native resolution, with some titles outputting in 16:9 at 854×480. Dolphin can take any game, internally render it up to sixteen times higher than native (called “4X rendering,” but effectively multiplying both the height and the width of the video by four), resulting in video rendered at up to 2560×2112. In addition to this, it can do both anti-aliasing and anisotropic filtering, the end result of which is a beautiful, stunning game that could easily be mistaken for something released within the last few years. 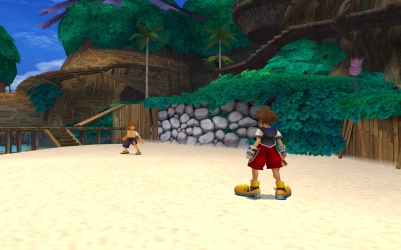 For the PlayStation 2, the leading emulator (in my opinion) is PCSX2. Much like Dolphin, it comes with some powerful tools built into it, including the option to render the games at a much higher internal resolution than the native 640×448 and add in effects like AA and AF. In fact, if you aren’t satisfied with sampling the game by a mere sixteen times the resolution (you madman!) that’s okay: you can simply enter a custom resolution of your choice to force the system to render at. So, if you absolutely have to see Final Fantasy X rendered in 8K, and don’t care if your system explodes in the process, by all means, go for it!

I’ve recently gotten into playing and even recording games with these types of settings to show what they could have looked like. I’ve given this treatment to Metroid Prime, and will also be releasing a 90-minute sample of Gauntlet: Seven Sorrows rendered with incredible settings; look for that on Monday!

So, if you have the system to handle this, I highly suggest giving it a look. Even if the best you can render to is 720p or 1080p, seeing your favorite GameCube, Wii, or PS2 games with crisper visuals is always a welcome treat!

Oh, and a quick disclaimer: emulation is a grey area. In my opinion, if you own the game or if it’s abandonware, there’s no real issue in emulating it, but be smart and use your best judgment!