The Quest for Equality

Not long ago, when I was doing an afternoon retro stream of Kirby’s Adventure on the NES, someone in the chat room brought up an interesting point. He said, “I applaud your courage in streaming and doing YouTube videos – most members of the LGBT community shy away from that, you know?” At first, I wasn’t really sure what to say in response. In truth, I usually avoid conversations that might get preachy in some fashion while doing media like that because, honestly, I know people come to these things for the gaming and to relax for a while — not to have some kind of ideology tossed at them.

But, in any event, I think he had a very good point. There are trolls all over the place, especially on the internet where they can hide behind a veil of anonymity and spit venom at people as they will. A lot of people who (sadly!) are likely on the fringes of “normal society,” but are downright awesome, beautiful, and incredible, may shy away from being any sort of public personality for reasons like this. I mean, who wants to put up with people who tell you how terrible you are just when you’re trying to do something fun like playing a classic game from your childhood?

In a way, this is kind of a double-edged sword. The fact is, you need people who are willing to deal with the trolls and be a positive example for others to follow, standing up to that oppression. However, the person who takes up that cause will inevitably have to deal with lots of negativity and hate from other people who just don’t know how to treat their fellow person. 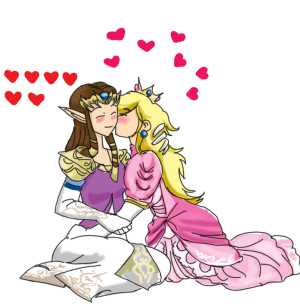 Honestly, many of us have a lot working against us in the first place. I often get told that I must not know anything about games, or get messages like this either on YouTube or a stream: “I’m surprised you even know what Zelda is,” or “What the heck would you know about Mega Man?” This is along the same lines as when I was more into MMORPGs and would have male players who would want to treat me differently, “escort” me through dungeons, give me free gear either as a “gift” (to virtually court me?) or because they may have thought I wasn’t capable of getting it for myself, etc. Make no mistake: I know everyone isn’t like that, so I’m simply drawing on those experiences to make a point.

To me, it always comes back to this question: what does my gender status have to do with the materials I produce or my knowledge of gaming? What does who I like matter when it comes to making a horror gameplay video?

The fact that I have to continue asking this question is a bit disturbing, don’t you think? Why is it that people get so caught up on trivial things to the point they can’t think about anything else? Why are they watching your videos in the first place if they find what you represent that repulsive? It’s just like the troll who goes through and mass “-1s” your videos just to make a point, rather than growing a spine or having the decency to shove off.

A friend of mine recently started telling me about some of his sexual fetishes (I promise this is related!) and mentioned that he felt that he was so strange for having them and always kept them locked deep inside. Basically, that he already felt judged before he even mentioned anything to anyone else, and this deep sense of judgment kept him from ever expressing to anyone he dated any of the things that turned him on. Being somewhat nosy, and since he brought the topic up, I asked him what kind of stuff it was that he felt so embarrassed about, and I won’t mention his name or exactly what he said (since that isn’t really relevant here), but the short version is that the stuff he told me was quite mild in the first place.

To me, it seems like it’s very easy to fall into a pattern of feeling shamed for things you like or for just being who you are. I don’t feel like being true to yourself should be something that you’re shamed about but, unfortunately, that’s just how it is sometimes. So, we need to break out of those patterns, but it just takes time.

For my part in things, I realize that I need to keep doing what I’m doing so I can help change things, and not just give up every time someone decides they want to be a jerk about something. For the most part, everyone has been super cool and enjoyed all of the things I’ve done, and the very positive comments I get here and there help reinforce that with me.

I know this article doesn’t have that much to do with Women’s History, but maybe it should. After all, we’re at an interesting point in the history of the human experience where we’re stepping out and being forced to accept new realities and accept people for who they are. This is a new way of going against oppression in the march for equality, and like with any other move of that nature, it takes time and patience and dealing with hateful people. But, we’re doing good work. I truly feel that the wonderful community at Nerdy but Flirty has done a great job to promote the work of women and those within the LGBT community as well, and this is one of the many reasons I am very proud to be a part of this team!

5 thoughts on “The Quest for Equality”