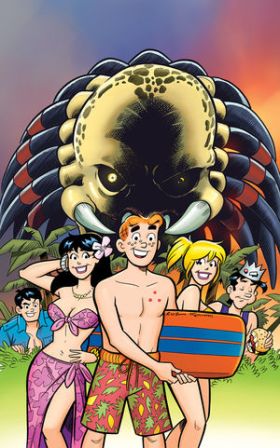 “America’s favorite teen meets the galaxy’s fiercest hunter! Archie and friends hit Costa Rica for Spring Break, where party games and beach games are soon replaced by the Most Dangerous Game! What mysterious attraction does the gang hold for the trophy-collecting Predator, and will the kids even realize they’re in danger before it claims them all?”

Okay, I’ve never read an Archie comic before in my life, but I saw this and went, “WHAT?!” So I had to read it. All I knew going in was Archie, Jughead, Betty, and Veronica. The first page boasts AvP – Archie in one corner, “Loveable. Maladroit. Mischievous. America’s favorite teen,” and Predator in the other, “Silent. Invisible. Invincible. The galaxy’s deadliest hunter.” If I wasn’t into this before, well…how could I not be now?! Jughead wins an all-expenses paid luxury beach vacation to Los Perdidos (maybe the same one as in Dead Rising 3?), courtesy of a lucky chip bag. He’s got a bunch of his closest friends with him, and they’re determined to have as great of a vacation as the private school kids. After a fight with Veronica, Betty goes into the jungle, finds a shrine, steals a knife, and sets off booby traps. There’s a few great references to the Predator movie, and I’m sure I missed some because it’s been a while since I’ve seen it. The comic has the humor of a clever teen movie (and high school stereotypes, at least so far); I was a bit surprised at how much I was grinning. I’d had the wrong impression about Archie – I thought it was going to be squeaky-clean humor. I was also surprised that there was blood, although I guess I shouldn’t have been, given the title of the series.

The art is pretty standard Archie art – I was familiar with the style from seeing digests in grocery store checkout lines, etc – it’s super colorful and nice to look at. The Predator vision is new though, haha, and it’s well done, although it doesn’t have as many colors as the movie version does. The Predator art is much darker and more detailed; he doesn’t look at home in this world, and it’s so bizarre to have him here. I would like to note that Betty and Veronica have a fight where they tear at each other’s clothes, making them even more scantily-clad than they were, and this feels like major fan service in a weird way. This is the first of a four-issue mini-series, so it’s not a big time commitment. Grab it! How can you resist a comic with the tag line, “Beach games…party games…The Most Dangerous Game!” It’s good, ridiculous, goofy fun (although very odd, tonally), and I’m curious to see what happens next!

One thought on “Comic Review: Archie vs. Predator #1”