“Poking fun at pop culture, politics, reality TV and more, join Kyle Keever in his politically incorrect quest to win a spot on the newest hit reality TV show, America’s Got Superpowers. But when a freak accident turns Kyle’s alter-ego, the Purple Patriot, into his main ego and triggers real superpowers at the cost of his sanity (and good taste), Kyle’s got a new mission to become the hero New York deserves, and definitely not the one it wants.”

Let’s get this out of the way – for being marketed as a comedy game, I can honestly say that I didn’t laugh once. It’s like this game had a laundry list for “who can we offend” and diligently checked everything off. I get that it was trying to be a satire, but when women are treated like utter shit even before the main character is turned into everyone’s worst idea of a conservative, it’s not cool and makes me alienated. Both Kyle and Mel (your sidekick) treat women like pieces of meat in-dialogue, even once saying “get her wet for me.” Letting “take her” be an option on a woman only for “I wish!” to be the response is another example. Even though the characters around Kyle call him out on being an asshole (post-transformation), it still leaves a bad taste in the player’s mouth that the character they’re playing is completely tone-deaf about women, minorities, immigrants, and the LGBTQ community. There are a lot of borderline gay slurs in the game after Kyle’s transformation, and even before that, there are a lot of homophobic stereotypes and jokes. Even in the world itself, there are reality shows called America’s Got Hos and My Big Fat G—- Wife. Almost everything about the “humor” is gross and offensive. On top of all this, the pop-culture humor is sometimes irrelevant; it might have worked when the game was being made, but doesn’t now. I can’t imagine that this will hold up in even a couple years.

The graphics are fitting for the over-the-top, cartoony tone of the game. Everything is quite colorful, and zooming-in on the characters while they still exist in the space isn’t something I’ve seen before. The swirly, Batman-style transitions are a nice touch. I did have some graphical glitches, such as character textures showing up in the widescreen bars on the top and bottom of the screen in extreme closeup. I also experienced some extremely poor pathfinding once – I thought the character wasn’t going to make it to where he was going. [Note: these graphical issues seem to have been fixed in a 2/10/2015 patch.]

Music is pretty good, although there’s not enough of it throughout the game, so it can get repetitive. Some of the selection is also questionable – over at StreamFriends, we called out a game from 2005 (Fahrenheit) for playing funk music behind the only black character, and guess what happens here? Latin music is also played for the only Latina character. Come on. Footstep sounds only play sometimes, which is weird. Voice acting is fine – nothing stands out either way except for one character whose mic sounds muffled.

Basically the only thing I liked about this game was the use of the verb coin; bring back the verb coin. There’s no hotspot finder, but the design is cartoony enough that you don’t need one. The puzzle design ranges acceptable to infuriating. For example, in episode two, there’s a point where you need to change back to Kyle from the Purple Patriot. Going to your dresser brings up the message, “I don’t want to change back into Kyle right now.” You end up having to go through four different tasks, traipsing all over town, only to end up doing almost what my first thought was. Another annoying puzzle was having to click a bulletin board enough times to pick up a leaflet when it’s not really indicated that it’s there for anything other than flavor text.

I ended up not using a walkthrough for most of the game, because there aren’t any available past a certain point. Luckily, Mel is always ready with a hint – if you stand idle for a bit, he’ll prompt you, and you can talk to him. Sometimes you have to talk to him in order to progress, which can be frustrating when you know what to do but the game won’t let you until you talk to him. Another annoying thing is the walking speed; characters can take forever to walk from one side of the room to the other. I never got stuck, but there were a lot of times where I was annoyed at the puzzles.

There are a total of 78 achievements and thirty trading cards across the three episodes. The first two episodes took me two hours each, and the final episode took me three hours. This was seven hours too many. 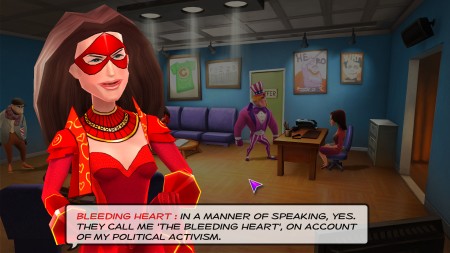 Supreme League of Patriots is an unfunny, offensive, and frustrating adventure. Avoid.

4 thoughts on “Review: Supreme League of Patriots – SLOP is Right”