Before I even list the games that I personally think won the coveted title of Game of the Year for 2014, I must preface this by saying I am not Nintendo biased – Nintendo just had a damn good year. I am thoroughly impressed by all the titles Nintendo dropped that were simply incredible. They offered long-time fans of the company some fresh ideas for popular franchises while also bringing in those who had been skeptical about the Wii U and 3DS for quite some time. I finally crossed over into the land of “Next” Gen (which is more accurately the “Current” Gen) by purchasing a Wii U. That being said, here are the games that rocked my socks in 2014, in no particular order.

The reason I purchased a Wii U was for this little gem right here – Bayonetta 2. Having been obsessed with the first game, I was concerned when it was announced that the second game would be exclusive to the Wii U. However, when the game released in October 2014, I took the plunge and purchased an entire console for one video game. That’s something I can honestly say I’ve never done before! Bayonetta is the epitome of feminine wiles and sexiness. The existence of the character gives me confidence as a woman.

There’s no mistake that Smash Bros. has been one of the greatest titles to ever release. The concept alone makes it a formidable contender for best video game of all time. The latest iteration of the franchise, Super Smash Bros. 3DS/WiiU, released with a new addition to drive everyone crazy – Amiibos! These toys were able to be leveled up and used in Smash Bros. as well as other select Nintendo titles. Much sought after, certain characters are so rare that it’s near impossible to get your hands on them. 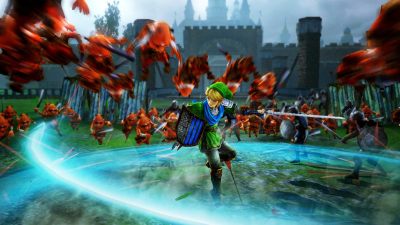 Legend of Zelda is my second favorite video game franchise (only second to Uncharted), and Dynasty Warriors is a game I’ve only dabbled in a time or two. However, the combination of LoZ characters and the DW style of gameplay had given me something I didn’t even know that I wanted! Hyrule Warriors is fun, and seeing the LoZ characters in this type of game (with stunning costumes) is a great experience. Nintendo really hit it out of the park in 2014 with all these great games

Survival horror is certainly not my specialty, so I actually just watched this entire game get played by YouTubers such as Markiplier, Radbrad, and Raychul Moore. I enjoy watching horror games, but certainly can’t pick up a controller myself to play them. The Evil Within was still a great game to even just watch due to the engaging story and atmospheric settings.

Honorable Mentions – Infamous Second Son, Shadows of Mordor, and Dragon Age Inquistion – because I have yet to properly play these titles, I can’t really say they’re a part of my Game of the Year picks, but it’s now 2015, and these titles are still on my MUST PLAY list. I had to mention them just for that fact alone.

One thought on “GOTY 2014: Butterfly Edition”