Review: TRI: Of Friendship and Madness – A Quest for a Fox

I recently received a free copy of TRI: Of Friendship and Madness from an awesome PR contact, and I have to admit that when I saw it, I was immediately drawn in by the artistic style and the premise. The truth is, I do enjoy a good puzzle game, but these are often not all that easy to find. I like something unique that draws me in. Lately, few games have managed to do so, but this one felt quite promising, so how does it stack up?

TRI is an interesting game. It starts out with you taking the first-person role of an unnamed woman who finds herself in a Japanese-styled temple high up in the mountains. The place is empty except for a masked monk. The monk says that he’s excited to see you, but that he doesn’t wish to share his story with you until you prove yourself worthy. A quick run through an obstacle course (which serves as the game’s tutorial) solves this, and he proceeds to tell you that he’s the guardian of the temple of the Odd Gods. The temple had been home to a pair of foxes, but the guardian says that his particular fox companion has gone missing. Your quest, as you may guess, is to enter the world of the Odd Gods and track down the fox god, who is somewhere deep within.

Inside the Tower of Nowhere (the third area of the game), players receive the TRI – a mystical object that can be used to create three-sided objects wherever one desires. This ability can be used to traverse areas that you’d have no way to cross otherwise. When using the TRI, players click to create three distinct points. If the TRI can be stood upon successfully, it will turn yellow. If it’s too steep or otherwise unusable, it turns red. This basic ability is used to progress through the next couple of stages, after which it receives an upgrade that allows triangles to serve as gravitational planes, making their careful placement useful when one needs to walk on the walls or ceiling.

Each area presents the players with new challenges to overcome, but the goal remains the same: locate three fox statues that serve as keys to unlock the portal to the next plane of the Odd Gods’ world. Within each stage, though, are additional golden idols that can be found which unlock bonus content. While the bonus content isn’t anything too exciting (snippits of interviews, some mock-ups and early screenshots, etc.), they do give you a reason to explore every nook and cranny of the game. Also, the game does keep track of how much time it takes you to complete each area, and while this in no way affects gameplay, it does give you a reason to go back and see if you can complete an area more efficiently.

TRI has a total of sixteen stages to complete, which is more than I initially thought it might have. Yet, even if this number seems low to you for the $14.99 asking price, let me warn you that as you get farther into the game, current stages may take longer to complete initially than all of the previous stages took combined. I can easily say that the seventh area is one that I spent far more time in than all stages previous to it put together. Some areas are massive and sprawling, and others require you to really think outside the box and consider all of the options you have with your available powers in order to overcome them. In fact, while the game starts off fairly easy in the first couple of stages, the learning curve thereafter increases quite sharply. Not even halfway through the game, you’ll find that you’re being pushed to your limit by certain places.

While I love the overall design, the relaxing and interesting soundtrack, and the game’s story and gameplay focus, I found that the innovative gameplay is also this title’s greatest weakness. There were plenty of times where I found myself trying to draw triangles in areas where there was no excuse for it not to work, only to come up empty-handed over and over again. Often, deleting a triangle and drawing the exact same one again was somehow necessary to getting the one I wanted to work. There were also times when traversing the triangles that went over walls and onto ceilings when I’d fall off of them, despite thinking I was on them quite perfectly. I’ll also point out that there were a few instances where I managed to get stuck, and either had to generate a triangle on top of myself to be “shot” out of the place I was stuck in, or I was forced to load a previous save file.

I also found the accent of the temple’s guardian a bit of a shock at times. I felt that he should sound somewhat Japanese, yet the voice actor speaks with what sounds like a somewhat-masked Russian accent. He certainly does a good job nonetheless, but I found the accent took a bit of time to get used to, and I also found myself wishing they’d done a better job with sound editing, as it was obvious that his bits were recorded in an echoey room, especially so when you speak with him in an outside setting. 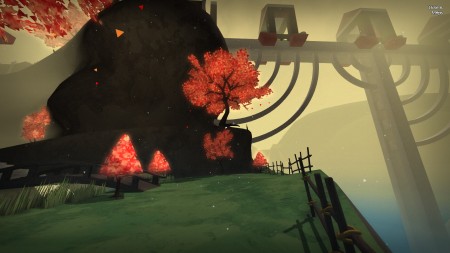 This game is one where the greatest adversary you face will be yourself and your own patience and cunning. There are no enemies to be found, and death is something you won’t experience until much later in the game. Most of the time, falling incredible distances is simply an inconvenience, and falling into the void will simply force you to respawn safely nearby. Later, you’ll encounter what appears to be acid, as well as a deadly laser, and direct contact with either of these will force you to load from the last save (or autosave) – a feature which can be abused much like a save-state in an emulator.

Overall, TRI is a very original, atmospheric, and compelling game, but it isn’t completely without flaws. The amount of content available as well as the time it will take to complete it makes it more than worth the $14.99 asking price. If you were a fan of the Portal games, you may feel right at home here, but this is definitely a game that any puzzle aficionado or platforming fan should really take a look at.