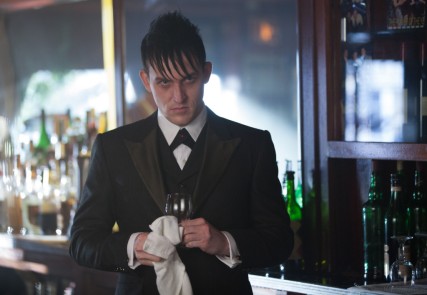 Previously on Gotham, Bruce is investigating a connection between the Arkham plan and the murder of his parents, some slightly confusing politicking between the two crime families (Falcone and Maroni) is going on, Fish has hired a girl as a “weapon,” and Barbara left the apartment (finally) because Jim doesn’t like her having any secrets whatsoever.

As the episode begins, Bruce is working on becoming the world’s greatest detective, complete with his very own bulletin board of newspaper clippings. The villain of the week is passing out hallucinogenic super-strength drugs to unsuspecting citizens (maybe you have it coming if you breathe in a mysterious green liquid that a stranger gives you? no?). Fish has an awesome moment where she gets up in the face of a sexist mob dude who says women belong in the bedroom or the kitchen. Albert continues to be ornery, but you can now tell it’s because he’s worried about Bruce and doesn’t really know what to do with him. I think that Edward continues to be under-utilized by the show. This is the episode that’s most reminded me of a comic book, because of this super-serum and the program surrounding it. I’m still really curious about what exactly Fish hired the woman for. There are some pretty cool, subtle effects in this episode. Barbara was nowhere to be seen.