Day one of SDCC is almost over, so I’ve got some highlights for you! 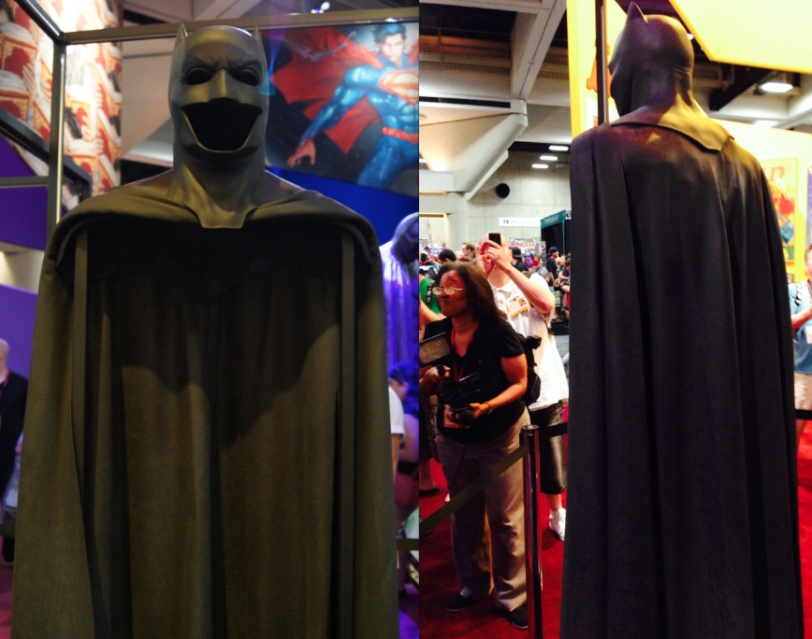 First up, we have some new Batman v Superman: Dawn of Justice reveals – the cowl, and another, more close-up picture of Ben Affleck in the iconic costume.

We’ve also got a concept art poster for Ant-Man, a movie I’m still not sold on; this poster is pretty great though.

Guillermo del Toro gave a sneak peek of his new movie, Crimson Peak, starring Tom Hiddleston, Jessica Chastain, and Charlie Hunnam. He describes it as an “anti-romance…a romance with ghosts.” Del Toro’s previous movie was Pacific Rim, but this reminds me more of the vibes of the film he was nominated for an Oscar for – Pan’s Labyrinth.

Christopher Nolan made a surprise appearance, along with Matthew McConaughey, to show off a new trailer for Interstellar, their upcoming space movie. Not much is known about the plot – Nolan is keeping it under wraps, but the little that’s been revealed so far is quite intriguing.

In television news, 24 star Kiefer Sutherland attended his first SDCC to lead a panel in front of four thousand fans. He spoke about how much the series has meant to him, the excitement and sadness he felt at doing one last season, and the difficulties of filming in London. There’s still potentially a movie in the works, but nothing is set in stone. There was a Community panel, called Greendale Forever, celebrating the upcoming sixth season of the show that all the fans have been clamoring for. Not a lot of new information was given, but the new season will probably start sometime after Christmas. There was a Hannibal panel where creator Bryan Fuller, along with many of the show’s stars, revealed news about season three. Hannibal is my favorite show on television right now, so I really loved seeing the live tweets from the “Pannibal.” Most exciting was the appearance of Raul Esparza, confirming that he will be returning for the third season. Fuller also said that they aren’t worried about spoilers so much as getting everyone excited for season three, so they’ll be generous and transparent with information. New characters coming in from the books include Commander Apache, Lady Murasaki, and Cordell.

The upcoming live-action Halo series, Halo: Nightfall, will follow Jameson Locke on his journey to becoming a Spartan. The first public discussion of the series took place today. Mike Colter (The Good Wife) will be playing Jameson Locke. The series will be five episodes long and will be included with the Master Chief Collection in addition to airing on XBL.

Stan Lee unfortunately had to cancel his appearance due to laryngitis, but is otherwise in good health and told everyone to have a great time.