The Game is On! Sherlock-Themed Playing Cards Kickstarter

Need something Sherlock-y and adorable to get you through the probable two-year wait forSherlock season four from the BBC? Look no further than The Game is On! Sherlock Holmes Based Playing Cards-USPCC  Kickstarter by Tabitha Smith (aka Tabz). Tabz is amazingly awesome, and a geek through and through. I met her at GenCon, and it’s my pleasure to be able to call her my friend. 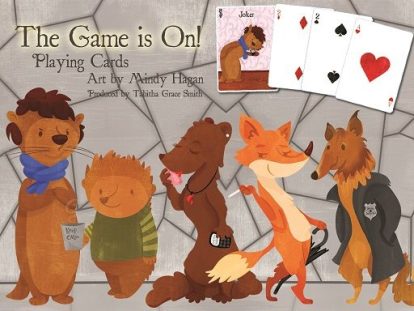 As you can see, it’s all of the Sherlock characters re-imagined as freaking cute animals! Sherlock is, of course, an otter. And Watson is a hedgehog! I love that Irene Adler is a mink, that’s so appropriate! The Kickstarter is also doing really cool custom dice, a bottle opener, and a coin.

Here are some of the pledge levels:

There are also some really cool stretch goals, like custom deck seals, a deck of cards by freaking awesome artist Shane Tyree, and an e-book with essays about Sherlock and why we love him with contributing geeky, famous writers of like Bonnie Burton and Jenna Busch.

Here’s some sample art for the stretch goal deck by Shane (who is another person-friend of mine and all-around fantastic person):

So seriously, go check it out! The art for the animal deck is adorable and so well done, and there’s lots of other goodies that I didn’t mention. But hurry! It ends Thursday, Jun 19, 2014 at 9:00 PM CDT.