“Wow, you know a lot about yarn crafts!”

Broken Age was a hugely successful Kickstarter from Double Fine Productions, my personal first backed Kickstarter, and represents Tim Schafer’s first adventure game in sixteen years. This game is a big deal not only for fans of the genre, but everyone who’s interested in crowdfunding. Also, if you backed the game, you got access to an amazing documentary from 2 Player Productions about the game’s creation.

Watch the two trailers for the two main characters, Vella and Shay:

Broken Age is a timeless coming-of-age story of barfing trees and talking spoons. Vella Tartine and Shay Volta are two teenagers in strangely similar situations, but radically different worlds. The player can freely switch between their stories, helping them take control of their own lives, and dealing with the unexpected adventures that follow.

At the start of the game, you’re presented with a split-screen view of our two sleeping protagonists, and you pick who you want to start with. This choice doesn’t really matter though, as you can switch between Vella and Shay at any time (I did it when I got stuck, so I could spend some time on a different set of puzzles). Vella’s story is about her being an offering in the Maiden Feast, an event that occurs every fourteen years to placate the Mogs, a species of huge monsters. Vella has other ideas, however, and thinks they should try to kill the Mog. Shay’s story takes place on a spaceship, where he’s being severely coddled by the ship’s computer (aka Mom) and wants to find a way to break out of his monotonous routine. The game could be enjoyed by both children and adults, and some of the themes it’s starting to explore are pretty deep (tradition, parental involvement, etc – I don’t want to say too much).

Special mention has to go to Vella for being an AWESOME girl character. She doesn’t stand for the traditional sacrificial girl role – she wants to fight the monster and will do it on her own if no one will help her. She’s funny, smart, and well-rounded, and already has my vote for favorite female character in our next NBF awards. Something nice about both protagonists is that even though they’re preteens, their life experiences have made them mature for their age, so I never felt like I was playing a little kid.

According to Steam, it took me five hours to complete Act I. 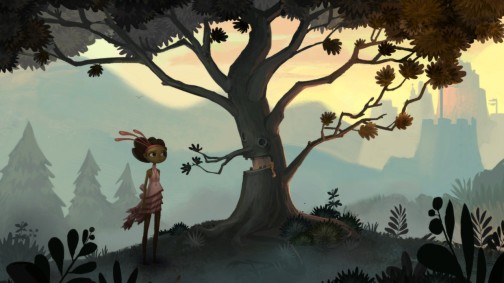 Broken Age is beautiful. The 2D graphics are hand-painted, and most of the time you can actually see brushstrokes. The textures used are really cool too; you could count Vella’s hair strands if you wanted. Everything is smoothly animated, and the interface is unobtrusive. The art styles and colors for the Shay and Vella are different; Vella’s world is more realistic, where Shay’s uses bold colors and more geometric shapes. There’s also a secret retro mode that makes the game look pixelated.

Both the soundtrack and the voice acting are top-notch. The soundtrack is done by Peter McConnell (staple composer for LucasArts and thus a lot of my favorite adventure games) and wouldn’t feel out of place in a film. It’s performed by The Melbourne Symphony Orchestra along with a separate sextet, and I’m probably going to pick it up. You can get it on Bandcamp! Again, there are differences between the music for Vella and the music for Shay, which contribute to making the two halves of the game feel quite different.

The voice cast includes Elijah Wood, Wil Wheaton, Jennifer Hale, Jack Black, Pendleton Ward, Gray DeLisle, Cree Summer, and many more. Everyone sounds perfect for their characters, but at the same time it never took me out of the game to hear celebrity voices (I didn’t even realize that Wil Wheaton was there until after I finished!). There are plenty of non-celebrity voice actors, and they all provide excellent performances as well. 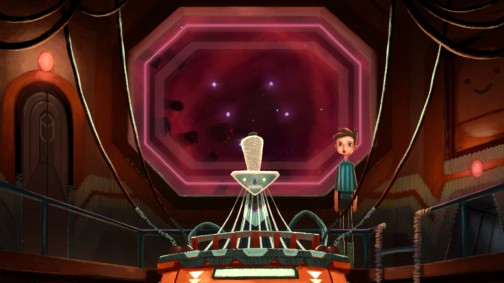 Broken Age was conceived as a classic point-and-click adventure, but it takes some of the frustrations of the games from the 90s away and focuses on story and logical puzzles instead of puzzles that make you want to rip your hair out. I welcome this change! I only had to look at a walkthrough a couple times, which is a vast improvement from my usual walkthrough consultation number.

Everything is done with the left mouse button – no need for anything else. You drag items out of the inventory bar at the bottom of the screen to use them on objects in the world by default, but you can change that to the more traditional two-click system. There’s no pixel hunting because of the art style, and there’s also no hint system or object highlighter or anything like that, which I didn’t miss at all in this game. Something else that’s interesting is that there’s no inventory combination puzzles; I wonder if Act II will see some of these, but it’s not something that I think is necessarily a must. Don’t think I didn’t try combining things just to see what Vella and Shay said!

The puzzles are all logical, which is a huge deal for an adventure game, and I can’t emphasize my delight with that enough. There are aha! moments, but I arrived at them organically after thinking, not after using a walkthrough and wondering how anyone was possibly supposed to figure out that puzzle on their own. I hope Act II continues this method of puzzle-solving.

Lastly, I’d like to point out that there’s at least one reference to Monkey Island in the game, along with what are possibly two Loom references. However, these are not obtrusive, and the Monkey Island one is the only one I’m actually 100% sure is a reference. It didn’t take me out of the game, and Broken Age is not self-referential beyond that one joke. 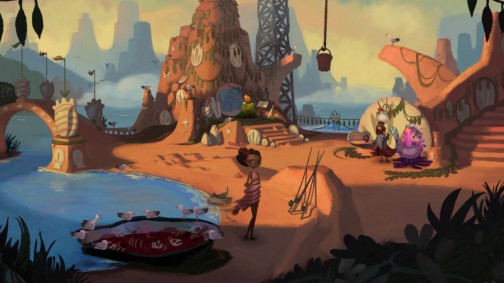 I’m so happy I backed Broken Age – it’s a beautiful, funny, creative game that was absolutely worth it. Tim Schafer has long been one of my favorite video game creators, and he doesn’t disappoint here. I can’t wait to play Act II – I have so many questions and theories!

Get Broken Age on Steam for $24.99, which will let you play Act I now and Act II when it comes out. You can also get it with the soundtrack for $29.99. DRM-free copies will be out soon. Follow Double Fine on their official site, Facebook, Twitter, Tumblr, Instagram, and YouTube.