Review: Regency Love Transports you Back in Time

Regency Love is a new iOS game from Tea for Three Studios that may remind you a bit of Everlove: Rose, which I reviewed a few months ago. I’m really excited to see another game in the interactive fiction/romance genre coming to iOS, and I hope the market continues to grow. This is the team’s first project and first time building a game, and it’s turned out fantastically. 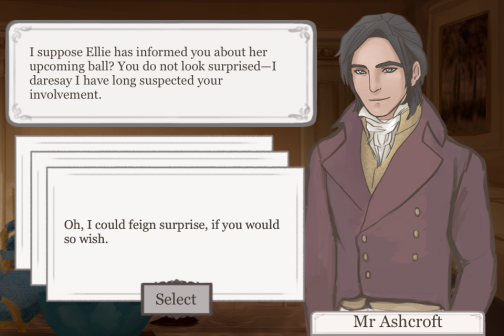 Would you dance, practice the piano, or perhaps embroider a handkerchief? Take tea with your mother, visit an old friend, or ask after a new acquaintance, who just so happens to own a rather fetching waistcoat? Walk in the woods with a dashing companion, or discuss poetry with a reserved gentleman friend? Discover Regency Love: a world of stories, waiting at your fingertips.

When the game begins, you’re emerging from mourning your father, who passed away a year ago. From there, you simply live your life, talking to people in town and strengthening your skillset as a proper (or not so proper, up to you) Regency-era woman. The main focus of the game is romance, but there’s plenty of other conversations to be had (Bechdel test passed!). I was immediately drawn into the story, and the only time I put the game down was to go to work. It’s emotionally affecting, exciting, and well-written. I came to care about all the characters, and was even hurt at times. The game also has a fair bit of humor, especially when it comes to Mrs. Norris (the town gossip), your best friend Mary, and Lord Fat Cat, who is an absolutely adorable and super-smart cat. Regency Love is heavily influenced by the works of Jane Austen, but you can enjoy the game without having read any of her works – and it might inspire you to! 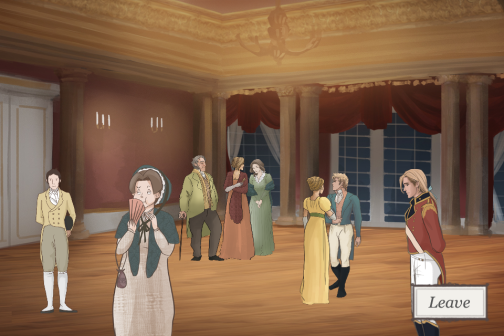 The artwork is gorgeous. Backgrounds are painted in different styles, with the woods being especially Impressionistic, and there’s always something nice to look at. All of the characters have a distinct look to them, with some being ultra-realistic and others being more of a caricature that reflects their personality (like Mr. Digby, the sweet-but-bland man who is absolutely taken with you, on the left of that picture). You never see your character, which makes it easy to transport yourself into the world. There’s no voicing, but I wasn’t bothered by that at all. The music consists of beautiful, varied piano pieces. There was one instance when something went wrong where the music took a particularly dark turn, which was surprising but very cool. There’s enough variation in the music so that you don’t get tired of a particular piece. 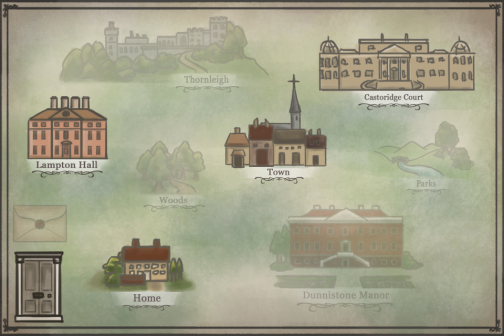 Gameplay in Regency Love mostly consists of conversation with the townsfolk. You’re able to shape your character and her story by the choices you make in dialogue, and you can reverse a decision you’ve made easily. You can save whenever you like throughout the game, and it also autosaves after every conversation. There are eight locations to visit, plus the occasional received letter, and each of them will either let you play the next chapter of the game (often, more than one chapter is available) or answer a trivia question to get motivation points. These points allow you to develop your reading, drawing, music, needlework, dancing, and riding skills, which will unlock further chapters and allow you to progress. You are rated on your character traits (amiable, compassionate, gentle, sensible, and forthright), based on how you speak to people. You can also gain motivation points by playing hangman after conversations. The trivia questions and hangman games are not infinite, so you’ll start to remember the answers, but this didn’t bother me because of how much fun I was having (and these become optional after you get the points you want anyway).

The meat of the game is the story and your relationships, and you generally have three choices of what to say in each conversation. You can be as polite or as sassy as you want to be, and there’s a lot of opportunity to be a progressive woman for the times (not all characters will approve of this). I don’t want to spoil much of the story, but I will share that my chosen suitor had me positively swooning – and I changed my mind as to who I wanted to pursue about halfway through.

There’s an extras menu, which shows you the cutscenes (really, full-screen artworks), characters, and epilogues you have unlocked. When I finished the game, I still had three missing cutscenes and five missing characters to discover. The game has quite a bit of replay value as it stands right now, and the designers hope to expand the game (depending on its success) with future content packs, which I eagerly await.

If any part of you is a romantic, if you love storytelling, if you were an English major, or any combination thereof, go get this game immediately. Tea for Three Studios has done an absolutely stunning job with Regency Love, and I can’t wait to see more from them.

Get the game on the App Store here for $2.99 until January 15th, after which it will go to its regular price of $4.99. It requires iOS 5.0 or later. It’s compatible with iPhone, iPad, and iPod touch and is optimized for iPhone 5. Like the game and the team on Facebook, follow the team on Twitter, and visit the official website. It was designed for iPhone, but it looked gorgeous on my iPad.

2 thoughts on “Review: Regency Love Transports you Back in Time”