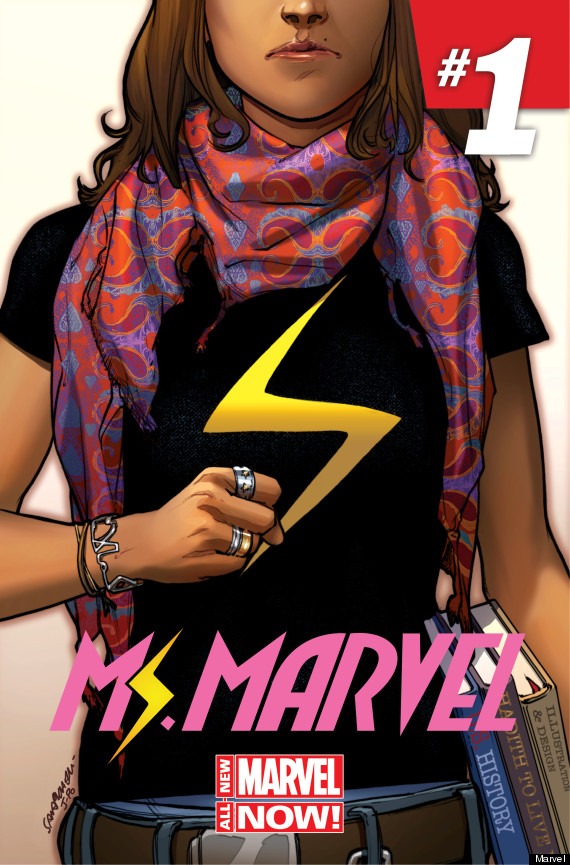 Marvel’s Ms. Marvel is going to be re-imagined this coming February as a teenage Muslim girl from New Jersey, known as Kamala Khan when she’s not behind the mask. Ms. Marvel’s superpower is that she can shapeshift. Kamala was created by Marvel editors Sana Amanat and Steve Wacker, inspired by Sana’s experiences growing up Muslim-American. G. Willow Wilson, author of 2008’s Cairo, is going to be the writer of the series. The previous Ms. Marvel, Carol Danvers, is now Captain Marvel. G. Willow Wilson says:

“I wanted Ms. Marvel to be true-to-life, something real people could relate to, particularly young women. High school was a very vivid time in my life, so I drew heavily on those experiences — impending adulthood, dealing with school, emotionally-charged friendships that are such a huge part of being a teenager. It’s for all the geek girls out there, and everybody else who’s ever looked at life from the fringe.”

She’s also prepared for some backlash: “I do expect some negativity, not only from people who are anti-Muslim, but people who are Muslim and might want the character portrayed in a particular light.” There are a few more Muslim characters in comics though: Dust/Sooraya Quadir from X-Men, Green Lantern/Simon Baz from DC Comics, and The 99 universe, featuring mainly Muslim superheroes, which crossed over with The Justice League in 2010.

Here’s some background for the new series:

“Kamala, whose family is from Pakistan, has devotedly followed the career of the blond, blue-eyed Carol Danvers, who now goes by Captain Marvel, a name she inherited from a male hero. When Kamala discovers her powers, including the ability to change shape, she takes on the code name Ms. Marvel — what Carol called herself when she began her superhero career.”

I’m looking forward to this series, and hope it signifies more diverse comic leads to come!

2 thoughts on “New Ms. Marvel is a Muslim-American Teenager”