That is, and will always be, my response for why I didn’t succeed in defeating Jacques in my hands-on with the upcoming Borderlands 2

DLC, T.K. Baha’s Bloody Harvest. You see, I was on a roll, and we managed to get to the second tier of the boss. But I had to keep reviving him.

Yup. That’s why this new boss was so hard…my teammate was no good… >_> 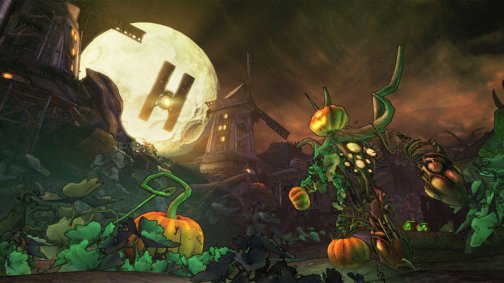 T.K. Baha’s Bloody Harvest is the upcoming Halloween DLC for Borderlands 2, and although T.K. is involved and there is a pumpkin patch, it is not to be confused with the first Borderlands Halloween DLC, The Zombie Island of Dr. Ned

, which also featured a pumpkin-head monster.

So what’s different? Well, difficulty level for sure. There are also candy drops that offer special buffers, and the DLC is not as big as the Dr. Ned DLC, with this story being more of a one-off (I managed to weasel the story out of them, but I can’t tell you without spoiling it). You also get to wear Jacques’s head after you defeat him. Which is just sick.

I can’t wait to play the full DLC and tell you all about it. I love that Gearbox is so good about giving us so much DLC content. This DLC will be part of three Headhunter Packs, meaning there are more dead people to wear on our heads!

T.K. Baha’s Bloody Harvest is due to hit PlayStation 3, Xbox 360, and Windows PC this October.