Attack of the Friday Monsters! A Tokyo Tale Review (3DS)

Attack of the Friday Monsters! A Tokyo Tale is an adorable 3DS game from LEVEL-5, the folks that brought us Ni No Kuni and Professor Layton. I quite enjoyed my time with it, but could see how everyone may not feel the same about this short trip to past Japan.

Attack of the Friday Monsters! A Tokyo Tale takes place in the “Showa” era of Japan, which is in the early 1970s. In a little town on the outskirts of Tokyo, Fuji no Hana, the monsters (kaiju) on TV come to life every Friday.

I think the quote from Kaz Ayabe, CEO and game designer of Millennium Kitchen (which worked with LEVEL-5 to release the game) really captures the kind of game this is:

Back then, giant monsters (kaiju) appeared routinely on a specific day of every week in Japan – that is, the world inside the TV shows “came to life.” For children of the time, it was an invaluable extension of everyday life.

I tried to create the childhood dream of living in this world as a compact game with a certain level of satirical poignancy. The courage we muster in times of distress and our tolerance towards other people is important in any age. We created this game so players can relive that wonderful time where no one questioned the values of those innocent years of your childhood. 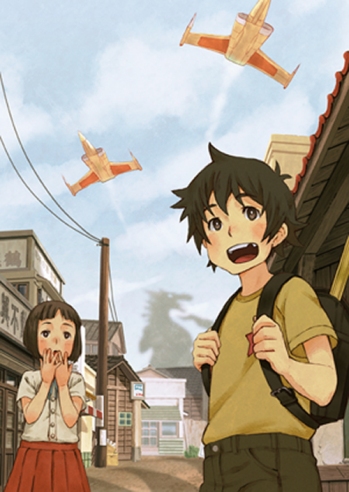 The not questioning part was very poignant for me as I played, and adults indulged the children around them by not closing their imaginations. When a cop played along and saluted Sohta (the protagonist), I felt a real surge of joy. The plot gets crazy towards the end, but makes perfect sense if you remember that you’re looking at this from the viewpoint of a 4th grader.

The gameplay is extremely simple. You run around the village talking to people, picking up glimmers, transforming glimmers into cards, and battling the neighborhood kids in a card game.

The pace was slow and child-like, and I think the gameplay went perfectly with the tone the game was trying to instill. Playing this game was more like watching an interactive Studio Ghibli movie than anything else. That’s not to say there isnt a raising of stakes and a grand, exciting climax. There is. A climax full of life lessons and kaiju.

The game is only about two-and-a-half hours long, but there is a bonus “level” after you finish, called Saturday, no less. This mode allows you to run around playing the card game, learning more about various things that happened, and finishing quests. I quite enjoyed it. 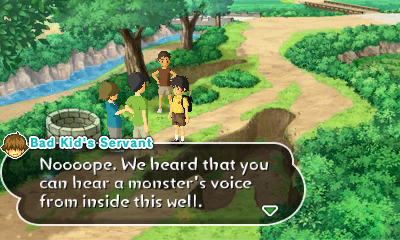 Normally, I hate the graphics on the 3DS, but Level-5 knew what they were doing ,and the hand-drawn backgrounds are gorgeous, with quiet, small town scenery. Even the color tone helps give the impression of nostalgia.

The music is also superb for setting the mood, and the spoken dialogue is lovely Japanese instead of an awkward dub.

The premise is simple and the childlike feeling is kind of wonderful. Kudos to Ayabe for completely achieving his vision for this game.

Before you buy this game based on that score, I want to be clear about what I liked. I certainly don’t think this game is for everyone, and it does feel more like a game for children younger even than your average pre-teen, but for anime fans, Japanophiles, people who can appreciate quiet, beautiful moments, and those of us who miss the imagination of our childhood, this game is worth the price point.

Attack of the Friday Monsters! A Tokyo Tale is available now in the Nintendo eShop for $7.99.