Whatever Happened to Journalistic Integrity Anyway?

Now and then, something will happen that really gets me thinking about a lot of pretty deep and heavy subjects. This is one of those times. I’m not inclined to let any names slip or decry any specific organizations, as those who are in-the-know already know what I am talking about and everyone else won’t benefit from knowing specifics anyway, but I recently made the decision to break all official ties with one of my affiliates for which I served as an editor. The event itself was a long time coming, and the only surprise associated with it is that it took me this long to finally cut loose. However, the outcome serves as a good lead-in to the subject I hinted at in this article’s title.

The organization in question is one that I helped build from the ground up and worked with for the better part of two-and-a-half years. For a while, we had a very good thing going – a strong balance between news of all the latest goings-on in the gaming community as well as original articles on lesser-known titles and retro games. Yet, a good friend of mine who actually kind of got me involved there in the first place was driven away from the community in early 2012 due to a disagreement with the site owner and another key player. They essentially told him that his content wasn’t really helping build the community and that they wanted to create a more centralized news database. His departure should have led me to part ways as well, yet I stuck it out in hopes that it might get better. Plus, I was able to post my own podcast on the site, do a lot of original video content, and was given support for my other random writings. This all changed within the past couple of months when decisions were made to cut back on certain types of media for copyright reasons as well as another matter I will get to in a moment.

In the case of the media cutbacks, I finally did get a solid answer about the reasoning behind the restrictions. As it turned out, they weren’t worried so much about lawsuits as they were about being blacklisted among game developers. While doing extended streams and let’s play videos that showed entire games from beginning to end generally was not a problem when it came to legality and intellectual property, they feared that keeping that sort of content on the site might upset companies like Nintendo or ArenaNet. Though these companies might not sue the site, there was a chance they would at least put it on a list of untrusted media sources. Naturally, I think that is a silly fear and one that won’t ever come to fruition (and if it did, they would have come to me to remove the content and not the person who simply linked to it), but it was their decision and their website.

However, there was another matter which stemmed from a preview write-up I did that focused on the beta of Final Fantasy XIV: A Realm Reborn. First, I was accused of not consulting with the site owner or his news director regarding what types of content were okay to post or what specific games had special arrangements being made in terms of what could be published, by whom, and by what time. Then, the matter was brought up over a series of private messages about the desire to form “good relations with publishers: (in this case, RPG giant Square Enix) and needing to maintain those relationships in order to grow the site, make media and industry contacts, and continue to get “free swag.”

This, I felt, was the most egregious of the mistakes this venue had made. 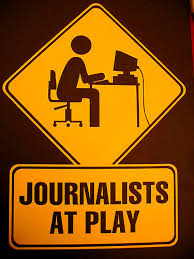 I find it funny that so many “journalists” don’t do any real journalism at all. These days, a lot of our so-called journalism is actually advertisements veiled under the guise of “professional, objective coverage.” When someone is afraid of no longer getting free materials or maintaining a friendship with a game developer because they might write a negative review of something, whatever they publish is already essentially worthless to me. Being someone who reviews movies, books, video games, or anything else should not be about getting free advertising and free goods from the company you are supposedly critiquing. Somehow, we’ve gotten really off-track with this in recent years, although I will freely admit that it is something that has always been a problem.

I can’t respect those who claim to be journalists but let the publisher (and provider of the materials) tell them when they need to have a preview or review article published, what types of things they can write in the article, and, in some cases, what they are allowed to say positively and negatively about the content. I do happen to get free games and other materials sent to me because of my work and media contacts, and I’ve always made a point of letting the people who want a review to be written know that if they ask me to write a review, there is a chance that it will be a negative one. This is an implied risk that the publisher should be willing to accept. I also make it quite clear that any such content will be written on my own schedule, because I do have other things to do, after all. So what if they get upset when I give their supposedly-Triple-A title an F score? If they didn’t make shitty games, then they wouldn’t be getting shitty reviews. And if they get upset because they sent me free stuff under the (incorrect) pretense that I would write a good review for them, I’ll just box the free stuff up and mail it back to them (stamped with a nice “Postage Due”) or give it away to charity.

Also, we seem to have gotten off-track with how scores from reviews are read. People see anything below about a seven or eight as a bad score, probably because they look at things as if they were academic systems. For many years, sites like IGN have had systems whereby a five out of ten is actually average (meaning that 50% of gamers will likely enjoy the game), but nowadays, people won’t even bother to read the explanation of the scores you give. If they see a six, instead of realizing that it may be a decent score, they will assume that you must mean a 60% on an academic scale, which is right on the F border.

I suppose breaking off from the affiliate in question frees me up to do things with other venues. I do plan to focus more on Nerdy But Flirty now that I have that ability. I’d also like to help my friend Warren with his site Random Thoughts and work with the Delightful Critics Club. But it’s sad when things like this have to come to an end.

So, what about you guys? Have any of you ever gone through something like this and, if so, what did you do?