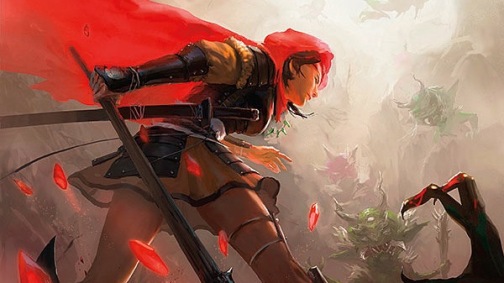 Akaneiro has become one of those comics that I hope stands out through time. Dark Horse Comics has so many awesome gems under their belt, and this is definitely one of them; it should be recognized as such. When I reviewed the first issue I mentioned that it was the classic tale of Red Riding Hood mixed with Japanese folklore; well, let me just tell you that the two mesh together seamlessly and gracefully.

In this issue, Kani is faced with tests not only to her physical self, but, even more intensely, to her morals and her mind. She accepts these tests head on with no thought of herself, which is more than most can say. Kani is an amazing female protagonist, and an extremely strong-willed one as well. If I wanted to put it simply, I would say that you should check out this comic, because this chick is badass!

I know I already mentioned how beautiful the art was, but now that I’ve read and looked at it more, so many things are standing out to me. The color sets the mood, and the combination of classic Japanese brush art with modern American comic style is brilliant and beautiful! I wanted to show it off so badly.

I really don’t want this comic to end, but we”ll see what happens in the conclusion.

One thought on “Comic Review: Akaneiro #2”