Star Wars: Legacy is the second iteration by that name. The first dealt with Cade Skywalker, the bounty hunter. This new series deals with Ania Solo, a descendent of Han and Leia.

The art in this issue is great and feels very reminiscent of Star Wars in general. However, this definitely feels like a “middle” issue, with not a lot going on. #3 is clearly meant to set up circumstances for the next issue, rather than sharing any surprises or intriguing battles. 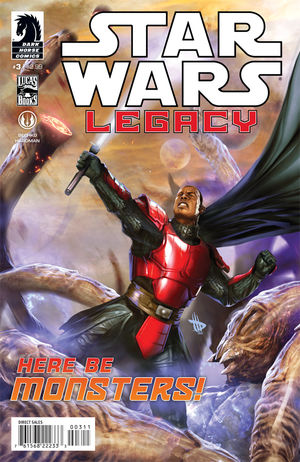 However, don’t let this stop you from giving the series a try! You can buy the digital copies here.

Here’s some more info about Ania, from an interview with the two writers, Corinna Bechko and Gabriel Hardman:

Traditionally, Star Wars adventures — heck, any adventures — are driven by a male lead. Why the decision to center this story on a female character, namely Ania Solo?

Hardman: The idea of a female lead was pitched to us, and that was a big, big thing that drew us to this project. It’s fundamentally the opportunity to do something different in the Star Wars universe. It’s a female character driving things, so it gives you a new perspective on the universe, but it’s also a new way to tell classic Star Wars stories – or a classic type of Star Wars story – just from a fresh perspective.

Hardman: Obviously, she comes from a lineage of characters who can take care of themselves, and there’s no question that she can do that. But she has flaws and she’s not, as Corinna was saying, she’s not a traditional, two-dimensional character. She’s somebody who has the potential to be an inspiring but very down-to-Earth human sort of character, as well.

Ania Solo and her friends have been chased, blockaded, and shot at, and now they’re stuck on a world of molten sulfur, all because an Imperial Knight wants them dead. Just when things seem bleakest, another Imperial Knight shows up! Is he here to help them, or help destroy them?