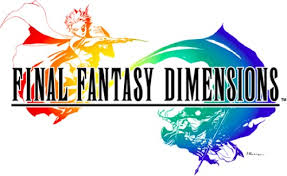 Final Fantasy Dimensions is a game that initially annoyed me quite a bit. It was scheduled to be released early in 2012, but this was pushed back for undisclosed reasons until late summer, and even then, it only appeared on iOS.  Square-Enix had initially promised that the game would be available on both iOS and Android at the same time, but when the iOS version was released, the Android one was no where to be found. The publisher didn’t have any real remark to make regarding this at the time, but many people speculated that it was because of how the Google Play store was perceived at the time and that they were holding off on release there for a while. Yet, regardless of whether this was true or not, the game finally made its way onto Android devices just in time for the “Mayan Calendar Day,” which was good – I had been waiting for it, because my tablet is powered by Android, and I preferred playing it on that as opposed to a phone screen.

Naturally, the question is: “Was it worth the wait?”

One of the biggest draws for me was the fact that the game appeared to be a throw-back to the golden age of Final Fantasy – an era about crystals, princesses, and complicated plots. In many ways, it looked kind of like what the company tried to do (pretty well, I might add) back in 2000 with Final Fantasy IX on the PlayStation. The graphics seemed to strongly resemble those seen in Final Fantasy V or maybe even Final Fantasy VI, and although it appeared there would be tons of story clichés, I knew this was all part of the fun with this game.

The story of Final Fantasy Dimensions revolves around two groups of people (one led by Sol and the other by Nacht) who eventually unite on a quest to save the world from the ambitions of the Avalonian Emperor and his army (a possible reference to Final Fantasy II and Final Fantasy VI, given the whole “evil empire” vibe). The Emperor, it seems, has thrown out his treaties with the various nations that agreed to accept his rule and has begun a quest for world domination yet, unsatisfied with temporal power alone, he seeks the crystals in order to attain immortality and unlimited power. Rather than allow the Emperor to get the crystals, the crystals use their power to sunder the world into two separate realms – one of light and one of darkness – and the player takes the reins of the two parties as they search the world for clues about the Empire’s plans and what they can do to stop them.

The game has a lot of references to other games in the series. Some are incredibly obvious, like the characters of Biggs, Wedge, and Cid (an engineer employed by Avalon). Then there are characters like Matoya (who has nothing to do with her FFI counterpart), Bikke the Pirate, the Kingdom of Aelfheim, Deist (the land of Dragoons that, just like in FFII, is planned to be poisoned by the Empire), and…well, the list goes on and on. Plus, there are even subtle references you can find, like a book in one of the libraries that references the Creator – the final boss fought in Final Fantasy IV: The After Years.

To me, this game is ultimately most similar to Final Fantasy III and Final Fantasy V because of how it uses the job system. Just like in those games, throughout your party’s journey, you unlock the ability to use various professions. At the beginning of this game, when the Lux’s Crystal shatters, Sol and his friends are bequeathed various special jobs they can perform from the shards of the crystal. In typical FF fashion, these are things like Warrior, Thief, Monk, Black Mage, White Mage, Red Mage, and Summoner. And, much like the two aforementioned games, you are encouraged to learn abilities from each of the skills. For example, even if you want Sol to focus on being mainly a Warrior and bringing high damage to the table, having him also level up Red Mage (which will unlock abilities you can equip with other professions, even though they will not be on the same tier as they would if Red Mage was your primary job) is beneficial for some additional healing and magical damage. In fact, the ability to learn skills and equip them with other professions reminds me of Final Fantasy XI in a very good way.

Yet, even with all the good things that this game has to offer, it certainly isn’t all sunshine and rainbows! Although I think the game has nice graphics that make me reminisce of the old 16-bit era RPGs, the way the graphics are designed gives me the feeling that the game was hastily made on a budget with a program like RPG Maker VX Ace. Yes, the game is meant to ultimately be kind of a generic fantasy RPG, but having seen so many other low-budget (though fun) games appear on iOS and Android that were admittedly made with a program like that, I cannot help but feel like it cheapens the experience. The game’s writing is also quite shoddy in places. This isn’t just cheesiness that I could overlook for the retro factor, but outright typos appear quite often in the main story dialogue. Sometimes, it is something simple like the game failing to justify font and thus having text that is improperly word-wrapped without so much as a hyphen to help it along.

These next two paragraphs may have a spoiler or two, so be warned!

One thing that really bugged me about the game is how many plotholes it has had. For example, we later find out that the sage-like character Elgo whom we meet early on in the game is, in fact, the Emperor of Avalon. It turns out that he befriended the Warriors of Light because they had bumped into him while he was on his way to the Crystal Temple, so he made up the excuse that he was a sage who had felt a disturbance in the crystal’s wavelengths. In fact, it was Elgo’s presence that the crystal felt which caused it to summon the Watch Beast to fight you and then allow itself to be shattered and sunder the world into two parts (done as a last-ditch effort to make collecting the other crystals that much harder for Elgo to do). Elgo stays with the party and fights imperials and even one of his generals with them, but these people don’t go, “Hey, isn’t that the Emperor?” Granted, the Emperor is usually wearing full armor when you see him otherwise, so that could explain some of it. The only explanation I have found is that in the fight on the airship, his general does recognize him, which is why he hesitates to fight him one-on-one, and also that Elgo’s “death” may have been a planned cover to allow him to go back to managing the Empire.

Okay, that might be possible; but then, what about the Mask?  It turns out that the Mask is the “personified good” within Elgo that separates from him when the world splits up, but this is something that does not happen to anyone else in the world. Very strange, I think. They had a lot of potential to tell an even deeper story, yet most of it was wasted.

The game does have a pretty awesome soundtrack at least, and I did find the auto-attack feature to be very useful when I simply wanted to grind away at levels and didn’t want to tap the controls constantly as I did so. Speaking of which, I was rather doubtful as to how this game would control, but Square-Enix does at least know what they are doing when it comes to touch-controlled RPGs. Basically, you tap the screen, a virtual control pad appears where you pressed, and you can determine where you want to move your characters. The rest of the interactions are done by tapping menu options and the like.

In the end, Final Fantasy Dimensions and its chapter-based story-telling (thankfully, you get all chapters up front in the Android version!) is a pretty decent game that will be even more appealing to long-time fans of the franchise, but it may not be for everyone. Perhaps, though, the key is to go into it without very much in the way of expectations. If you understand that it is paying homage to classic games, has some cheesy/erroneous writing, and contains quite a few plotholes, but you can overlook these things for the fun gameplay, then you might find it worth the price tag.

“A fun RPG that hails the classics, but it’s far from perfect.”

This article was originally written for and used with permission by Anjel Syndicate.