This review will be spoiler-free for episode five. If anyone is interested in my end-game statistics or the choices I made throughout the entire game, I will gladly respond to you in the comments section!

Here’s the official Telltale Games trailer for the final episode:

Episode five picks up right where we left off at the end of episode four, and the conversation Lee had with the stranger on the walkie talkie is re-played over the opening credits. Saying much about the plot itself would be pointless, as 95% of this game IS the plot/story and its discovery by the player.

Previously on The Walking Dead…

You get to make that last dialogue choice again as well, which I thought was interesting; we’ve never been given the opportunity to make a choice a second time. From there, No Time Left lives up to its name, and the action doesn’t stop until the credits have rolled. I found a lot of interesting parallels and echoes between the structure of episode one and this episode; for example, looking around a kitchen for a much-needed weapon happens in the beginning of both.

Character relationships have always been a huge part of The Walking Dead, and episode five takes everything that has been building up and gives us a nice sense of closure as to where these characters are after everything that has happened to them. I’ve always loved the humor that Omid injects into the series – I try to have Lee say funny things whenever I can, but sometimes it’s not enough to lighten the mood. Omid is one of my favorite characters, after Lee and Clementine (who are probably in my top five video game characters of all time). On the other hand, Kenny, who both myself and Lee had a complicated relationship with throughout the game, really redeemed himself for the both of us. There were some real heartwarming moments between him, Lee, and the rest of the survivors in this episode.

One of a few vertigo-inducing moments in No Time Left.

The graphics are, as usual, gorgeous. I have always loved the comic-like artwork; it’s not really like anything I have seen before. The cinematography is also excellent and has been throughout the series. The lag issues that I had in episodes two and three were almost non-existent here, although there was one time where a jump moment was ruined because of lag. Other than that, none of the quick time events were affected by lag, at least for me.

The music, while always beautiful, really stood out in this episode. In addition to especially poignant orchestrations throughout (especially during the first death I encountered), there is a really awesome guitar part during Lee’s final push to get to Clementine. All of the voice actors are also impeccable, as usual. Two of the voice actors, and my favorites, are nominated for Spike’s Video Game Awards: Melissa Hutchison for Clementine and Dave Fennoy for Lee. The one (mostly) new character, the stranger on the walkie talkie, was particularly effective at being unsettling. 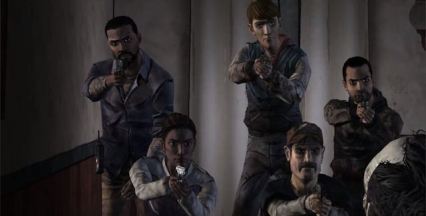 Standoff at the mansion.

Gameplay is the same as in the previous episodes: quick-time events occur when fighting and during most dialogue choices. I found that the decision-making window was generally much smaller, with the bar emptying faster than in the previous games. There is a brief centerpiece of utter calm that still manages to be one of the tensest in the game both because of the dialogue that is happening and the atmosphere that surrounds it. This really pushes you to the end of the episode quickly. I found it short compared to the previous three (maybe about the same as the first; it took me an hour and forty minutes, give or take), but it doesn’t matter – the conclusion to the story is absolutely worth it.

A note: wait until the credits are over before turning the game off! I would have been much more upset if I hadn’t waited.

This game has been, hands-down, the most well-written, emotionally affecting game I have ever played. Before The Walking Dead, no video game had ever made me cry. It hit me hard a few times throughout the series, and in the final twenty minutes of episode five, I had difficulty composing myself enough to keep playing. Even if you haven’t watched the show or read the comics, The Walking Dead‘s story and gameplay make it an absolute must-play game. I’ll be playing it again many times just to experience the story again and make different choices. Telltale has announced that there will be a season two, and I absolutely cannot wait. I think this game might be one of the best arguments for video games as art – genuine, deeply affecting art.

Oh, and if you’re looking for that gorgeous end credits song, look no further.

Tell me what you thought of The Walking Dead!

[Disclaimer: This game was purchased in order to review it.]