The Man with the Iron Fists Movie Review 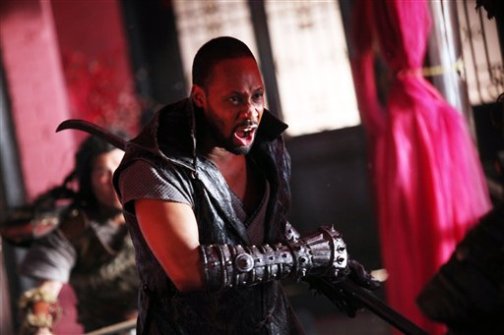 RZA in his directorial debut film, The Man with the Iron Fists.

The Man With the Iron Fists, directed by RZA and presented by Quentin Tarantino, is EXACTLY the movie you envision it being: horrible, yet entertaining.

The movie begins with a delivery of gold, which draws all kinds of warriors, assassins, and soldiers to Jungle Village in feudal China. RZA is both the narrator and the town blacksmith, while Russell Crowe plays Jack Knife (gosh yes, he does, yes he does), Lucy Liu is (SURPRISE) a brothel mistress, and Byron Mann (Ryu from Street Fighter) is Silver Lion.

Never a sexier brothel mistress there was.

For most people interested in the movie, it will be exactly what you envision: a cheesy kung fu movie with good actors and excellent fight scenes. However, I warn fans of Kill Bill that this is no Kill Bill. There is nothing new or smart or pulpy here: just good ol’ horrendously-plotted kung fu. If the thought of someone smacking a table to start a back flip up from their chair appeals to you, this is your kind of movie. If you just said “what?,” then this movie is probably not for you.

The casting was mostly great, with Lucy Liu and Russell Crowe completely stealing the show in one…intense…scene, although Byron Mann gave them a run for their money with his portrayal of the crazy, ambitious, and downright fun Silver Lion. Silver Lion’s hair and manliner also garner him props.

Rick Yune may have suffered more from unimaginative lines rather than bad acting, but I could possibly be giving him too much credit due to his SMOKING HOT good looks. He really should win an Oscar for most distractingly handsome actor in a film. *fans self*

Rick Yune being gorgeous in The Man With the Iron Fists.

The movie is beautiful. Scenes, backgrounds, heck, even the people are all beautiful.

The feudal Japanese setting allowed for lovely building and cherry blossom shots. The only detriment was that the brothel scene looked just like the place Lucy Liu hung out in Kill Bill.

The fight scenes were glorious. Just glorious. The music went perfectly, and each fight was so gorgeous and gory that I never wanted it to end. And yes, he punched a dude’s eye out. But that wasn’t even the best fight scene. Tables were smacked, animals were involved, and epic feats of magical armor were invoked.

I would say the only part of the film that was surprisingly ugly in contrast to all of the film’s beauty was the wardrobe. Those costumes were hideous and looked like they were made by a group of high school girls instead of a film studio with any kind of budget. There were also some ninja outfits that could only be described by the word “corny-ass.”

RZA as the narrator was a strange choice. His voice was pretty distracting, especially with that strong New York accent, making his in-story background an obvious lie.

Actually, RZA kinda sucked in general. As much as it hurts me to say, his timing was VERY off, and I found his performance unbelievable and distracting.

The story, of course, deserves a big raspberry. If this movie had been a silent film, it would have scored an A in my review. There was absolutely no need for all that awkward and nonsensical talking. Character reasoning made no sense, and random backstories seemed rushed and out of place.

The Role of Women and Children

Without revealing too much of the plot, I have to say that the two main women were short-changed in this movie. I can’t explain further, but pay attention to their faces at the end of the movie.

Also, the inclusion of children in the film was a very strange choice. They almost seemed like decoration to show off how much big, strong men were…what? Teddy bears on the inside? And their appearance near the end of the movie seems very forced and nonsensical…what are you doing there, child? Go back to the house! Stop letting Brass Man give you piggy backs! He is a murderer!

This movie is a cheesy ode to kung fu made with famous actors and Western sensibilities. With amazing fight scenes and a beautiful cast, I would have given it an A if it was a silent film.

Everyone was beautiful and sexy. I appreciated that. Rick Yune, I want your babies. All of the babies.

2 thoughts on “The Man with the Iron Fists Movie Review”