Talk your way out of trouble as a silver-tongued Snake Oiler, plumb the refried mysteries of the cosmos as a wise and subtle Beanslinger, or let your fists do the talking as a fierce Cow Puncher. Explore a vast open world and encounter a colorful cast of characters, some of whom are good, many of whom are bad, and a few of whom are ugly.”

The character creation experience is pretty barebones, but that’s to be expected when everyone’s a stick figure. You name yourself and pick which class you want to play: cow puncher (fighter), beanslinger (mage), or snake oiler (smooth-talker who can whip people with snakes). From there, you leave your family’s farm and strike out on your own. You can tell your little brother why you’re heading west; your motivations are up to you. An ominous event, the Cows Coming Home, is alluded to early on, and that’s only one part of what makes the countryside so dangerous.

There’s honestly no grand plotline here, but it really didn’t matter to me. The main quest consists of getting as far west as you can with the aid of an incredibly accident-prone train, but the side quests are what really makes the game fun. The final cutscene will show you the effect your presence had on the world, Fallout-style.

West of Loathing is also genuinely funny, which is wonderful. I laughed out loud throughout the game because you get into so many absurd situations, and characters say a lot of unexpected things. 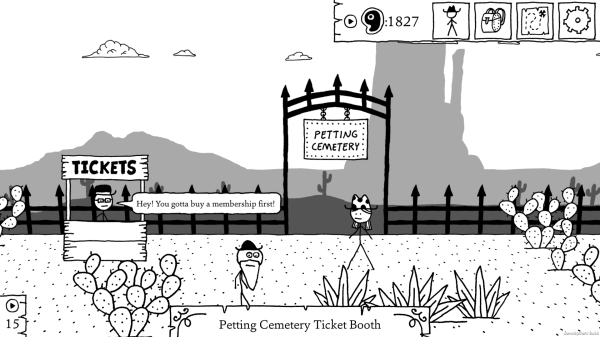 Yes, okay, this is a game made up of stick figures, but it has a bunch of nice, small touches! Whenever you carry a light, shadows are cast, and your character will perform idle animations if you’ve been standing still for too long. Animations in general are fluid, a few stray pathfinding issues notwithstanding. The combat animations are fun too; I particularly like the snakes. I would recommend playing with nostalgia mode on once you unlock it (hint: visit the Dirtwater Post Office), because it’s easier on the eyes than the default stark whiteness. As for sound, I found myself humming the music more than once, and I never got tired of it in my eight hours of playtime.

Speaking of that eight hours, I know there are many side quests that I was unable to finish for one reason or another: not having enough information, not being strong enough, or just not stumbling across them. There’s definitely more playtime here than that, and there’s replayability in that there are different ways to approach things. There are also three different pardners (companions) to choose from; you can pick one per game, and each have different skills. I went with Doc Alice, who has a vendetta against a necromancer, a big shotgun, and the ability to heal you in battle. You can talk to your pardner whenever you get to a new area, and they’ll give you a bit of info about it. They also serve as your quest journal, reminding you about all the things you agreed to help with.

The map is huge, with about fifty locations to find, and the more you explore, the more quests you’ll unearth. You can beeline for the ending, but it’s not really a traditional ending because you can keep playing after you make it to your destination.

Combat is turn-based, and damage does not carry between battles, which is a really nice touch that makes things easier, especially because there are no difficulty levels. Each distinct area of the map has increasingly tougher enemies, however — don’t get too cocky while exploring! Eating food, having alcoholic beverages, and drinking potions can produce helpful effects, but you’re limited in consumption by your stats, so you have to balance things carefully. Effects can also be achieved through events; for example, if you lose a fight, you become angry, which boosts your stats a bit, but if you get too angry, you’ll pass out. Another great thing is that there are no inventory limits to speak of, so if you’re a packrat like me, don’t fret.

The leveling up system is one of the most unique I’ve seen in an RPG. Fights and quests will give you XP, which all goes into a pool. Each stat and skill costs a certain number of XP to raise by a point. There’s also an option to auto-level, which will let the game attempt to distribute your points for a well-rounded character. Perks (some useful, some silly) can be gained by reading books and random world events.

There are 23 Steam achievements and seven trading cards.

I lost track of time while playing, that’s how much fun I had with West of Loathing. I wholeheartedly recommend it to any RPG fan, especially if you’re looking for something with a sense of humor. I’m already plotting future playthroughs.

You can get West of Loathing on Steam for $10.99, with a current promo of $9.89 until August 17th. You can play on Windows, Mac, and Linux. An iOS version will be released later this year. Follow the game on the official site, Facebook, and Twitter.

One thought on “Review: West of Loathing”