By Caylie Sadin May 1, 2014 Atmosfear board game Flip the Table interactive board game Nightmare The Gatekeeper VHS

Okay, so there’s this game from 1991 called Nightmare, an Atmosfear game. My fiance and I heard about it through the podcast Flip the Table, which is all about cheesy, the weird, and obscure board games, and Nightmare came up.

It’s an interactive VHS board game, which means that there’s a 60 minute long tape that you have playing while you play the game. If you don’t win in an hour, the game wins. Intriguing. The podcast concluded that despite the game’s flaws, it was actually pretty fun. But the catch is, it’s waaaay out of print. It’s one of those games that if you tried to buy it off of eBay or Amazon, you’d be looking at paying a hundred bucks or so.

So, we forgot about the game. That is, until we were heading to my fiance, Danny’s, family reunion, and we stopped at a garage sale in the middle-of-nowhere, Mississippi, and there it was — just sitting next to a rocking chair. We opened it up and the pieces hadn’t even been taken off the sprue…meaning it had never been played. We turned to the man running the garage sale and asked the price.

FIVE DOLLARS?! At the time, we thought the game was probably worth $30 or $40, so we were still pretty excited to only pay $5 for this board game, much less any board game. We managed to keep our game faces on and paid the man, all the while we were screaming with joy on the inside. We couldn’t believe that we’d just managed to find Nightmare in the most unlikely place for so cheap!

Once we got to Danny’s family reunion, our quest for a VHS player began, because now that we had the game, we knew we had to play it as soon as possible. But our room had no VHS player, so Danny went to the front desk to ask if ANY of the rooms had VHS players. It turned that out some of them did, but the front desk isn’t sure which of the rooms are equipped with the devices. So, off to the maintenance workers. They also aren’t sure which rooms might have a VHS player. Danny starts asking all of his billion relatives, and lo and behold, his grandmother actually has one! So, we furtively disconnect it the next day and ferry it to our room.

We enticed his cousin, his sister, and her boyfriend into playing with us later that night, and so began our most amazing journey with the game.

The mechanics of the game are very simple. Roll the die and move the number of spaces the die says. Each space is either a blank tombstone or one that has the words chance, time, or fate, and if you land on a space with a word, you take the relevant card. The time cards have an exact minute and second count, and you have to play them at that second.

During the game, there’s a timer up on the screen that counts from zero seconds up to 60 minutes, and you can’t pause. Well, you can, but you’re not supposed to. The timer is a little silly at first, but as the game goes on, you start feeling that crunch, that panic of, “Oh God, is this board game going to beat us?” Besides the timer, there’s also The Gatekeeper. He’s the one who you’re interacting with. When he addresses you, if you fail to immediately say, “Yes, my Gatekeeper,” you get punished. He also gives you challenges, and if you fail them, you’re punished. 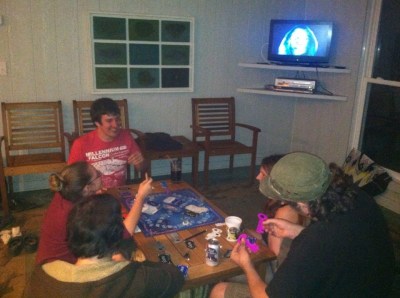 The whole goal of the game is to gather your six keys, which all have abilities on them, and to get to the center of the game and try to win. To win, you have to flip over a nightmare card, and on each of those cards the players write their fear. If you pick your own fear, you lose. If you don’t pick the nightmare card that you wrote, you win!

Ridiculous, right? Very. But it was actually so much fun! Without giving too much away about the actual interactive portion of the board game, the guy that plays The Gatekeeper is super, super invested in his performance. And oh man, there were definitely some moments when I couldn’t stop laughing.

But the game gets super intense, too! At the beginning of the game, we were just leisurely taking our turns, figuring out cards, and responding to when The Gatekeeper called on us. But when that timer hit about 20 minutes, we realized that we were nowhere near winning. We started yelling at each other to roll the fucking die already! All we wanted was to take our own turn and maybe win the Goddamn game! With like 30 seconds to go, I managed to grab all my keys, make it to the center of the game, and look at a nightmare card. It wasn’t mine, so I won! Except we forgot a few rules, so I didn’t really win, and the board game beat us. But in my heart, I still won that game — at least that’s what I’m telling myself.

All-in-all, it’s super ridiculous and fun. I recommend peeing before you start playing the game though. Because once you start the tape, you can’t pause! Needless to say, there was a mass exodus to the bathroom after we finished.

Now I’m home and I just got another interactive VHS board game…Star Trek: The Next Generation Interactive VHS Board Game: A Klingon Challenge. That’s right you heard me. It’s basically Nightmare, but slightly improved. Oh, and instead of The Gatekeeper, it’s a Klingon barking orders at you. And it’s not always in English.

Now all I have to do is find a VHS player…but once I do, I’ll be reviewing that one too!

3 thoughts on “Retro Review – Nightmare: The VHS Interactive Board Game”